Heavy rains for more than a week have caused major damage to homes in rural Goa, with six sub-districts facing the brunt of the monsoon onslaught causing crores of rupees in damages, Chief Minister Pramod Sawant said on Friday. 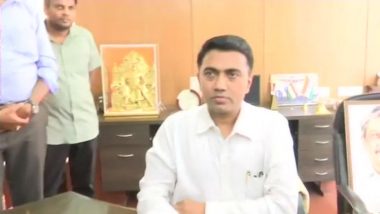 Panaji, July 24: Heavy rains for more than a week have caused major damage to homes in rural Goa, with six sub-districts facing the brunt of the monsoon onslaught causing crores of rupees in damages, Chief Minister Pramod Sawant said on Friday.

Sawant, who, along with several other ministers, visited rural areas in North Goa, where the flood-like situation may have led to the death of one woman, who was washed away in the torrent. Goa Floods: PM Narendra Modi Assures Centre's Full Assistance to Goa Amid Floods Due to Incessant Rains.

"Heavy rains have been witnessed in Goa over the last few days, which has led to areas like Sattari, Bicholim, Ponda, Dharbandora, Bardez, and Pernem being majorly hit. Such flooding has not occurred in Goa since 1982. A rough report is being prepared by the state Disaster Management team," he said, adding that while the exact quantum of damage has not been established yet, losses due to the rains and flooding are pegged in the region of a few crore rupees.

Nearly 500 houses, most of them built from mud, have been affected, while scores of families had to be evacuated from low-lying areas as a precaution.

"Government primary schools and schools in every sub district will be used as shelter homes for those who are affected by the heavy rains," Sawant said.

Sawant, on Friday, postponed his online interaction with students on Friday, opting to visit low-lying areas in Bicholim area of North Goa, where water accumulation has led to disruption in normal life.

He also denied allegations made by Health Minister Vishwajit Rane, who had blamed the state administration of being lax in its preparations ahead of the monsoons.

"All our disaster management teams have been on the job since last night," Sawant said.

(The above story first appeared on LatestLY on Jul 24, 2021 08:44 AM IST. For more news and updates on politics, world, sports, entertainment and lifestyle, log on to our website latestly.com).