The Gujarat Anti-Terrorist Squad (ATS) has seized 120 kg of heroin valued at around Rs 600 crore from Zinzuda village in Morbi district and arrested three persons in connection, police said on Monday. 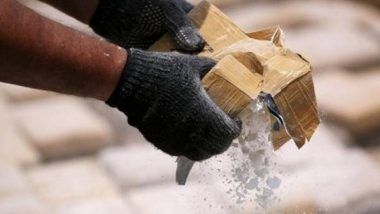 Morbi, November 15: The Gujarat Anti-Terrorist Squad (ATS) has seized 120 kg of heroin valued at around Rs 600 crore from Zinzuda village in Morbi district and arrested three persons in connection, police said on Monday. According to the police, the contraband seized on Sunday was being transported to Africa via Gujarat.

Addressing the media, Director General of Police (DGP), Ashish Bhatia said: "Based on intelligence inputs, the Gujarat ATS learnt that drugs were being brought here. Based on this information, a team of ATS raided the house of one Mukhtar Hussein Syed in Zinzuda village of Maliya-Miyana in Morbi district and recovered 120 kg of heroin, with an estimated international value of Rs 600 crore. Gujarat Drug Haul: ATS Seizes 120 Kg Drugs In Morbi District; 3 Arrested.

"The drug consignment was sent by one Zahid Bashir Baloch, a resident of Pakistan. Baloch had been absconding in an earlier case of seizure of 227 kg heroin registered by the Directorate of Revenue Intelligence. The present consignment was delivered in Devbhumi Dwarka district's Salaya during the last week of October.

The narcotics was initially hidden and subsequently moved to Zinzuda village. The consignment was intended to be sent to Africa via the Gujarat route. During interrogation, it was revealed that the accused persons decided to misappropriate the consignment and sell it buyers in India. "We are yet to arrest two other persons in Gujarat regarding the case."

(The above story first appeared on LatestLY on Nov 15, 2021 02:39 PM IST. For more news and updates on politics, world, sports, entertainment and lifestyle, log on to our website latestly.com).