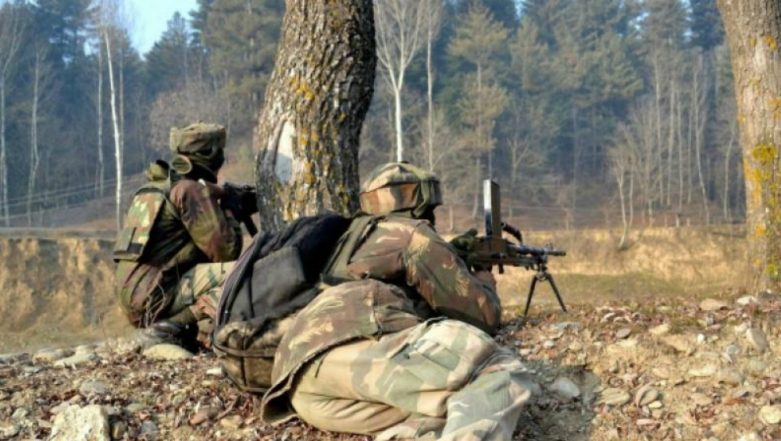 Srinagar, August 3: In a major breakthrough, the Indian Army foiled an infiltration attempt by a Pakistani Border Action Team (BAT) squad in Jammu and Kashmir’s Keran Sector in the last 36 hours. Around five to seven Pakistani Army regulars or suspected terrorists were neutralised by the Indian security forces. The bodies of the infiltrators were lying on the Line of Control (LoC). Pak Army Alleges Indian Troops Used Cluster Ammunition Along LoC, Indian Army Rejects Claim.

The Indian Army also issued aerial images of the deceased terrorist. Bodies of the deceased have not been recovered till now due to heavy firing across the LoC. According to reports, four Jaish-e-Mohammed terrorists were also eliminated by the Indian Army in the last 36 hours. A huge cache of arms and ammunition was also recovered from the terrorists. Jammu And Kashmir: Two Terrorists Gunned Down by Security Forces in Baramulla Encounter.

In the last 36 hours, Indian Army has foiled an infiltration attempt by a Pakistani BAT (Border Action Team) squad in Keran Sector. 5-7 Pakistani army regulars/terrorists eliminated, their bodies are lying on the LoC, not retrieved yet due to heavy firing. (Source: Indian Army) pic.twitter.com/gBa89BuQ0M

On Saturday, the Indian Army refuted Pakistan Army’s allegations that it had used cluster bombs across the LoC. The Army also alleged that Pakistan regularly attempts to push terrorists through infiltrations and assist them with weapons. Earlier, the Pakistan Army’s Inter-Services Public Relations (ISPR) said that the Indian troops had used "cluster ammunition" due to which two civilians were killed. The ISPR further claimed that a total of 11 people were critically injured.