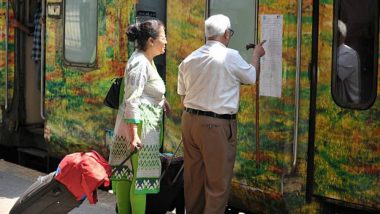 New Delhi, July 30: With Railway Board Chairman VK Yadav clearing the deck for private train operations in India, reports arrived that Indian Railways is preparing to allot land for private operators on a 35-year lease. These lands will be used to set up maintenance facilities and would be allotted at 'no extra cost'.

According to a report, published by Indian Express, the lands for greenfield maintenance depots across India will be allocated to the private train operators for the entire contract period of 35 years. After the tenure is over, the greenfield maintenance depots will belong to Indian Railways. Private Train Operations in India Will Begin by April 2023, Says Railway Board Chairman VK Yadav.

As per the details of the Request for Proposal, Indian Railways will be responsible for rail and road connectivity to the locations, but the private operators will have to set up their separate maintenance facilities. The Railways had even given free hand to the private players to bring in trains with any technology. Sources stated that a letter has already been sent by Railways Ministry to zonal railways and had asked reports by August 7.

For the required space, to be allotted on a 35-year lease to the private players for setting up maintenance facilities, the Railways have divided 12 clusters area-wise. They include Jaipur, Prayagraj, Howrah, Chandigarh, Patna, Chennai, Secundrabad, Bengaluru, and two each for Delhi and Mumbai. Also, Railways have asked zonal offices to identify lands for such greenfield maintenance depots.

Among other details, The Indian Railways have identified a total of 109 routes for 151 trains to be run by private players in these 12 clusters. The private players will have to wash, clean and inspect the trains after every 7,000 km of running. The railways have asked the zonal offices to identify two-hour slots in existing washing lines for the 12 clusters.

Last week, around 16 private companies took part in the pre-application meeting for Request for Qualification. The major private bidders include Bombardier, Vedanta Group’s Sterlite, GMR, BHEL, Bharat Forge, Medha, Titagarh Wagons, IRCTC, RK Associates, and some global equity investment firms. With this, Indian Railways expect to the private player to spend around Rs 30,000 crore. Meanwhile, the railways have maintained that this project is not to be construed as 'privatisation' of the railways.

(The above story first appeared on LatestLY on Jul 30, 2020 03:38 PM IST. For more news and updates on politics, world, sports, entertainment and lifestyle, log on to our website latestly.com).