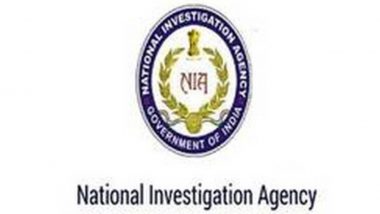 New Delhi, July 9: The Centre on Thursday said the National Investigation Agency will investigate the Kerala gold smuggling case, which has rocked the state and embroiled the Chief Minister Pinaray Vijayan's office into a political row. In a statement, the Ministry of Home Affairs (MHA) said it has allowed the NIA to probe the Kerala gold smuggling case. What is Kerala's Gold Smuggling Case And Why is CM Pinarayi Vijayan Under Attack?

"MHA permits National Investigation Agency (@NIA_India) to investigate the Thiruvananthapuram Airport Gold smuggling case, as the organised smuggling operation may have serious implications for national security," read a tweet by the spokesperson of the MHA. The case relates to the seizure of 30 kg gold that arrived on a cargo flight and was kept in a warehouse for release at the Thiruvananthapuram airport. Kerala Gold Smuggling Case: UAE Embassy Extends Full Cooperation With Indian Customs Authorities, Urges Stringent Legal Action Against Culprits.

The baggage had arrived from Dubai and is understood to have been marked to the UAE consulate which has its office in the heart of the state capital. The consulate's former PRO, Sarith, has already been arrested. The prime accused has been identified as Swapna Suresh who is reportedly close to Pinarayi Vijayan's former secretary M Sivasankar. Swapna had worked at the UAE consulate.

Despite dubious qualifications, she was holding a high paying job in the IT department which comes under the Chief Minister. Vijayan, while trying to damage control, shunted out Sivasankar. Earlier today, both the Congress and the BJP are holding statewide protests separately. Their supporters have clashed with police across the state. And, both the parties have demanded Vijayan to quit and face the probe.

Leader of Opposition Ramesh Chennithala has written to Prime Minister Narendra Modi demanding a probe by the CBI or Enforcement Directorate (ED) to unravel the gold smuggling case in which the UAE consulate also figures. Vijayan has been denying links between Swapna and his office, saying he is ready for any investigation.

(The above story first appeared on LatestLY on Jul 09, 2020 08:00 PM IST. For more news and updates on politics, world, sports, entertainment and lifestyle, log on to our website latestly.com).