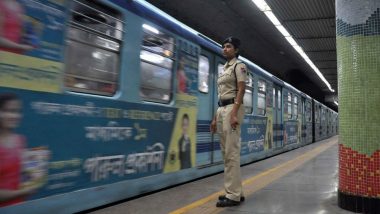 Kolkata, July 14: The East-West Metro tunnelling has stopped after more than 20 workers tested positive for coronavirus. According to a Times of India report, the tunnelling work for the Metro project had started on June 19, but now the virus has once again stalled the project.

The East-West Metro tunnels from Esplanade to Sealdah has been facing several challenges. The tunnelling had stopped for maintenance of the tunnel boring machine (TBM) on March 19 after which the nationwide lockdown was called a week later. The work had resumed on February 18, following the Calcutta High Court’s orders. However, work has not been able to progress due to the numerous roadblocks on its path. The Tunnel boring machine was scheduled to reach Sealdah by August. However, the latest disruption would delay this deadline to mid-September or later.

(The above story first appeared on LatestLY on Jul 14, 2020 09:05 AM IST. For more news and updates on politics, world, sports, entertainment and lifestyle, log on to our website latestly.com).