According to a tweet by ANI, the Yogi Adityanath-led government in Uttar Pradesh has started promoting tourism through decal work on Lucknow-Delhi Tejas express. A close look at the pictures tweeted by ANI shows the attractive display of tourists places stuck on the train. 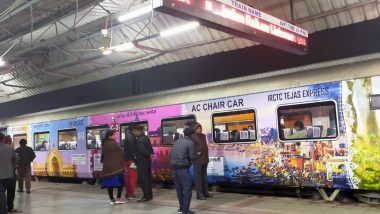 Lucknow, January 21: The Uttar Pradesh government has come up with a unique and creative way to promote state tourism. According to a tweet by ANI, the Yogi Adityanath-led government in Uttar Pradesh has started promoting tourist destinations through decal work on the Lucknow-Delhi Tejas express train. A close look at the pictures tweeted by ANI shows the attractive display of tourists spots in Uttar Pradesh being stuck on the train. Decal work basically refers to a design prepared on special paper for durable transfer on to another surface such as glass.

The state government has been taking many initiatives to boost the demand in the tourism sector. In Uttar Pradesh, the famous tourist attractions include Taj Mahal and other other UNESCO World Heritage sites like the Agra Fort and Fatehpur Sikri, and Varanasi, which is considered as the  spiritual capital of India. However, reports inform that in December tourism has taken a hit as protests  against the Citizenship (Amendment) Act (CAA) flared up across the country. Passengers of Delhi-Lucknow Train to Get Free Travel Insurance of Rs 25 Lakh Each, Baggage Services and More.

Take a Look at the Attractive Art:

According to the sixth edition of India State Ranking Survey 2019, Uttar Pradesh retained its position for a decade now as one of the best performing states in tourist attractions. While Tamil Nadu was the first, Uttar Pradesh ranked second in terms of domestic tourist visits and third in terms of international visitation.

The Lucknow-Delhi Tejas express is India's first private semi-high speed train and runs from Lucknow to Delhi six days a week. It was flagged off by the Chief Minister in October last year. Reports inform that the Uttar Pradesh government has significantly increased its expenditure on tourism as well as marketing and publicity to promote various destinations in the state.

(The above story first appeared on LatestLY on Jan 21, 2020 10:10 AM IST. For more news and updates on politics, world, sports, entertainment and lifestyle, log on to our website latestly.com).