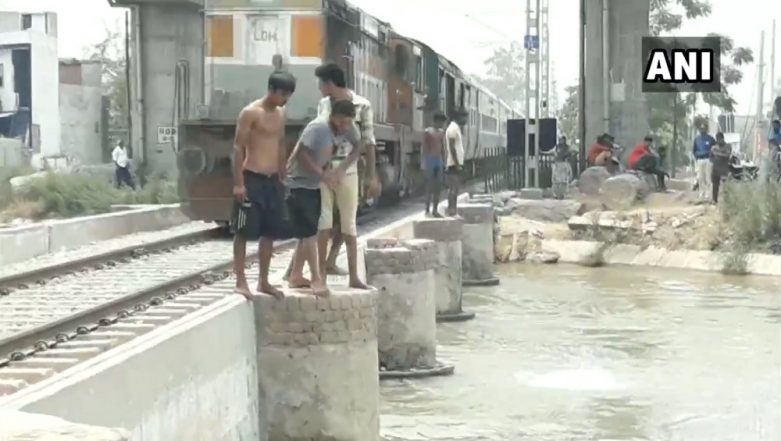 Ludhiana, July 4: Children, mostly boys have taken to performing dangerous stunts from a railway overbridge built on Gill canal here in Ludhiana. Whenever a train approaches, these children climb railways track and jump into a nearby canal, throwing caution out of the window. Local police say whenever they attempt to nab those boys, they fail as the boys inevitably manage to give them the slip.

"It has been 10-15 years since I have been coming here to jump into the canal. If someone is drowning, we save them," says a boy who jumps who pursue this dangerous ACTIVITY. According to police official, Rajan Deep Singh, PCR teams regularly patrol near the railway over bridge. "We have sent teams to catch those who dive in the canal. It is dangerous. They flee whenever our teams went there. Our PCR team is conducting patrolling in that area," he said. Mumbai Local Train Stunt Man Electrocuted After Hitting High Voltage Wires While Walking on Footboard: CCTV Video.

#WATCH Punjab: People seen diving into a canal in Ludhiana, while a train was passing by. Police say "Teams were sent to make them understand it's dangerous. But as soon as they saw u, they ran away. We're alert to see that no mishap takes place there&people can be saved." (03.6) pic.twitter.com/iBbe4PExRZ

Locals say it is thrilling to bathe in the canal and they are taking care to save those who come here and do not know swimming. "I do not have fear since I have been coming here since childhood. We do not let those swim who can do it," another diver said.