Monkey Beaten, Hanged to Death on Tree After It Enters Telangana House in Search of Food (Watch Video) 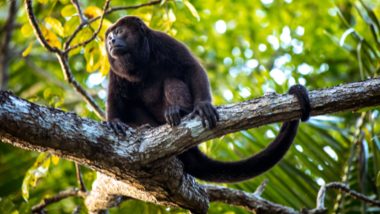 Khammam, June 29: In an outrageous incident, some youths beat up a monkey and strung it up on a tree to death while also releasing dogs to attack it in Ammapalem village in Telangana's Khammam district. A video of the heinous incident of animal cruelty has surfaced on social media, in which the monkey is seen hanging by a rope from a tree, desperately flailing its limbs while a couple of dogs attempt to pounce on and torment the hapless simian. After a while, several men are seen in the video approaching the animal with long sticks.

Forest officials have charged one villager Venkateshwar Rao under Wildlife Protection Act along with the other accused and arrested them. They were released on bail on Saturday and are set to be summoned for questioning by forest officials. Pregnant Elephant Killing Sparks Outrage in India; 5 Instances of Animal Cruelty Which Made Humanity Hang Its Head in Shame.

happened in Khammam district Of Telangana

It came to the house Of one man called Venkateswara Rao - it fell in water And he found it and did it @TelanganaCMO @dhanyarajendran @NewsX pic.twitter.com/Qinv2ayz8J

Rao had spotted the monkey, which had entered his residence apparently in search of food and beat it with a stick and hung it from a tree with the help of his friend. In the video of the incident, Rao could also be seen instructing his pet dogs to bite the monkey, which was fighting for its life.