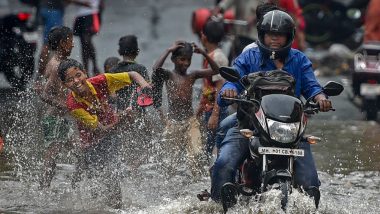 Mumbai, September 19: The India Meteorological Department (IMD) on Sunday predicted heavy rainfall for parts of Mumbai and Thane districts till September 22. The weather agency has informed that the city and suburbs are likely to witness heavy downpour with thundershowers on Sunday. In the wake of the weather conditions, the IMD has issued a 'yellow alert’. Isolated areas  of Mumbai and Thane are expected to receive heavy rainfall on Monday and Tuesday. A yellow alert means "be aware" as severe weather is possible over the next few days. Monsoon 2020: August Records 25% Excess Rainfall in India, Highest Since 1976, Says IMD.

Several areas of Mumbai were lashed with heavy rainfall on Saturday, especially towards the suburbs. Reports informed that the Santacruz weather observatory recorded 12.4 mm rain while Colaba recorded 2 mm rain between 8.30 am and 5.30 pm. For Sunday, cloud cover with possibility of moderate rain or thundershowers has been predicted. KS Hosalikar, deputy director-general, western region, IMD informed that enhanced rain activity is expected between September 19-22 in several parts of Maharashtra.

The official added that this is due to the likely formation of a low-pressure area over northeast Bay of Bengal by Sunday. In the wake of the weather conditions, lower level westerly winds are likely to strengthen and its associated convergence is expected over the west coast.  Hosalikar said extremely heavy rain across isolated areas of south Konkan in the coming days, parts of interior Maharashtra and parts of north Konkan.

(The above story first appeared on LatestLY on Sep 19, 2020 08:24 PM IST. For more news and updates on politics, world, sports, entertainment and lifestyle, log on to our website latestly.com).