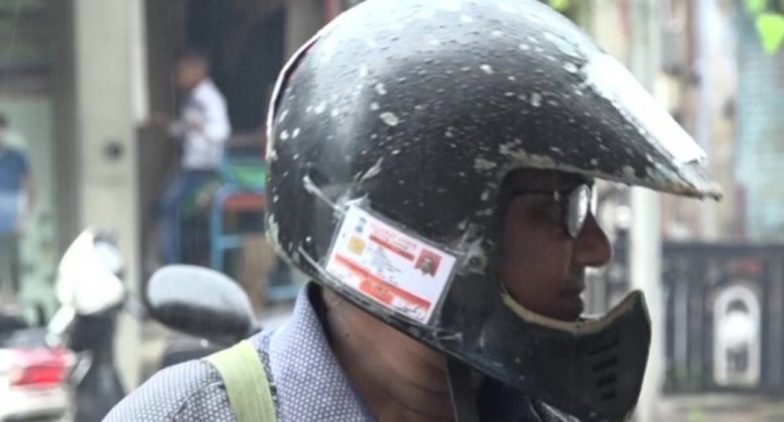 Vadodara, September 10: With the imposition of the new Motor Vehicles Act 2019, there are hefty fines for traffic violations. The fear of fines has made people innovative. In the latest, 55-year-old Rampal Shah, a resident of Gujarat's Vadodara, has pasted his driving licence, vehicle's Registration Certificate (RC), pollution under control (PUC) certificate, Insurance and other documents on his helmet. Motor Vehicle Amendment Act 2019 Dress Code Penalty: Uttar Pradesh Truck Drivers Wearing 'Lungi-Banyan' Can Face Rs 2,000 Fine.

Shah, who drives a Royal Enfield, has become a sensation on social media. And his photos are being widely shared on the internet. Speaking to news agency ANI, he said, "Helmet is the first thing I put on before riding a bike, that's why I pasted all documents on it so I don't face any fines as per new traffic regulations." Delhi Man Sets Bike on Fire After Being Asked to Pay Rs 11,000 As Fine Under the Motor Vehicle Act, 2019 (Watch Video).

Gujarat: R Shah, a resident of Vadodara has pasted his driving license, RC, insurance & other documents on his helmet. Says, "Helmet is the first thing I put on before riding a bike, that's why I pasted all documents on it so I don't face any fines as per new traffic regulations" pic.twitter.com/OezdsV1ONT

In the past few days, many cases where people were charged with hefty fines were reported. Earlier this month, a resident of Delhi was fined Rs 23,000 by the Gurugram traffic police for violating rules. Dinesh Madan was charged for not wearing a helmet and also not carrying vehicle-related documents.

In a similar case, a driver furious at Delhi police for issuing a fine set his own bike on fire. The incident took place in Delhi's Sheikh Sarai area after the man was told to pay Rs 11,000 fine for violating traffic rules under the Motor Vehicle (Amendment) Act, 2019.