Delhi Man Sets Bike on Fire After Being Asked to Pay Rs 11,000 As Fine Under the Motor Vehicle Act, 2019 (Watch Video) 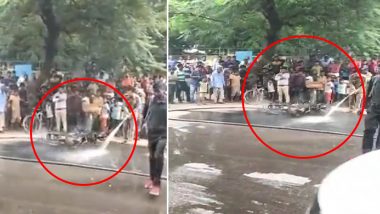 New Delhi, September 6: A man riding his bike became so furious at Delhi Police for issuing a challan that he set his bike on fire, said reports. The incident took place in Delhi's Sheikh Sarai area. The man allegedly vioated traffic rules and was told to pay Rs 11,000 fine under the Motor Vehicle (Amendment) Act, 2019. Under the amended act, the fines for violating traffic rules are more than five times higher than what it was before. Motor Vehicle (Amendment) Act, 2019: Delhi Cops to Pay Double Fine For Violating Traffic Rules.

The police said that the man who burnt his bike was not having the necessary papers and argued with the police when asked for the documents. The man was also drunk, said the police according to news agency ANI. Gurugram Traffic Police Imposes Rs 59,000 Fine on Trolley Driver for Drunken Driving Under Motor Vehicles (Amendment) Act 2019, Cops in Bhubaneswar and Bengaluru Follow Suit.

Delhi: A man allegedly set his bike on fire today after Delhi traffic police issued a challan to him for violating traffic rules, in Sheikh Sarai area. According to the police, he was in an inebriated condition. pic.twitter.com/hfHH7Gc6Lc

The penalty for drunken driving under the amended act is Rs 10,000 instead of Rs 2,000 before. The penalty for helmetless driving is Rs 1,000 in addition to a month's suspension of the owner or driver's licence. Milkman Sets His Royal Enfield Ablaze After Traffic Police Asks Him to Show Bike Papers in Gurugram.

Union Road Transport and Highways Minister Nitin Gadkari on Thursday justified hefty fines for violating traffic rules under the Motor Vehicles (Amendment) Act, saying it will prevent people from breaking traffic laws. There have been several incidents, especially in Gurugram, in the past few days when violators have been fined as much as Rs 40,000 under the newly-enacted Act.

On Thursday, Joint Commissioner of Police (traffic) Narendra Singh Bundela, said in a letter that all the traffic police officials will have to pay double the fines set under the amended law (Motor Vehicle Act, 2019) for breaking traffic rules whether driving official or private vehicles. The instruction by the Delhi traffic police commissioner comes to light after the police personnel were directed to wear cameras on their bodies to record traffic violations in the capital.

(The above story first appeared on LatestLY on Sep 06, 2019 09:59 AM IST. For more news and updates on politics, world, sports, entertainment and lifestyle, log on to our website latestly.com).