A police officer said that Pashte posted a message and video humiliating Prophet Mohammad after he had some arguments over petty issues in the group. 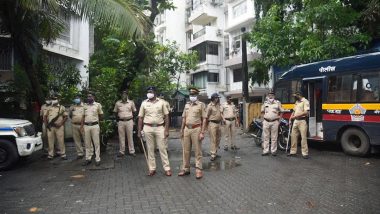 Mumbai, June 27: The Bhiwandi police on Saturday registered a case against a 27-year-old man for insulting Prophet Muhammad. The man shared an insulting message on one of the WhatsApp groups of which he was part. Police officials said that the message shared by the accused was on similar lines that former BJP leader Sharma had shared earlier.

According to a report in the Hindustan Times, the incident came to light after members of the group took offence and filed a case against him. Following this, the Nizampura police arrested the accused for spreading hatred in the name of religion. Plastic Ban in India: Why Is Single-Use Plastic Being Banned in the Country? Know List of Items To Be Prohibited From July 1; Here's All You Need To Know.

Interestingly, this is the sixth such case that has been filed in the last 15 days. Two cases were filed at Nizampura police station, three with Bhiwandi city and one with the Bhoiwada police station. The arrested accused has been identified as Nikesh Pashte, who works as a daily wager.

Sources from the police said that Pashte is a member of a local Bhiwandi Whatsapp Group, called ‘Bhiwandi A1’. A police officer said that Pashte posted a message and video humiliating Prophet Mohammad after he had some arguments over petty issues in the group.

Police inspector D Bane from Nijampura police said, "We received a complaint from one of the group members. After checking all messages and videos, we arrested Pashte for provoking and disturbing religious harmony in the city. After his arrest, he was produced in court and was remanded in police custody for two days. We are investigating the motive behind sharing such messages." Gujarat Shocker: Street Vendor, His Son and Nephew Beaten Up by Cops in Rajkot; Inquiry Ordered.

After the last arrest over controversial statements, the Bhiwandi police had requested citizens to maintain peace in the city. Residents were also warned against sharing any insulting videos, status, and messages on any social media platforms. DCP Yogesh Chavan had directed the police to take strict action against anyone who shared provoking content.

(The above story first appeared on LatestLY on Jun 27, 2022 05:00 PM IST. For more news and updates on politics, world, sports, entertainment and lifestyle, log on to our website latestly.com).