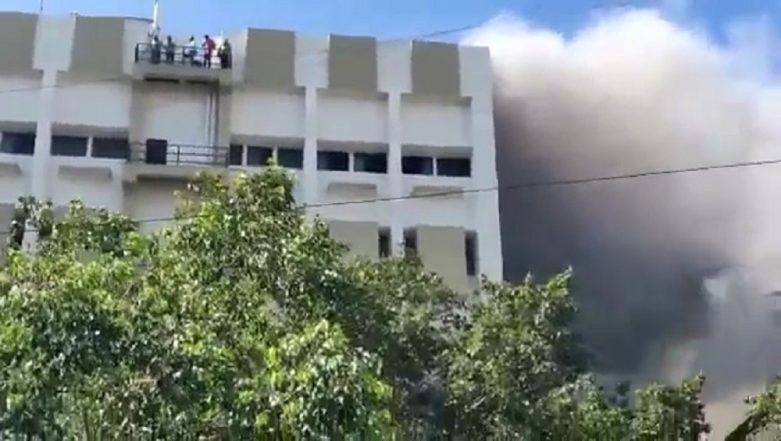 Mumbai, July 22: Mounting one of the biggest rescue operations in recent years, Mumbai firefighters saved a total of 84 persons trapped on the terrace and upper floors of the burning Mahanagar Telephone Nigam Ltd. exchange building at Bandra here on Monday evening.

Fireman Sagar D. Salve, 25, who was suffocated by smoke while fighting the blaze, was admitted to the Bhabha Hospital nearby and his condition is stable. Mumbai: Fire Breaks Out at MTNL Building in Bandra-Kurla Complex; 60 Rescued.

It was around 3.10 p.m., during the post-lunch period, that a massive blaze engulfed the third and fourth floors of the ground plus nine storey building and quickly spread upwards, trapping many MTNL employees working on the upper floors.

Some MTNL staffers, who were out for lunch at that time, said they saw huge clouds of smoke billowing out of the building and immediately alerted their colleagues to move to safety.

As there was no escape route to go down, many of them did the next best thing by rushing towards the upper floors and terrace, which proved to be a life-saver for them.

Some of the trapped women wrapped their 'dupattas' around their faces to keep out smoke, while men used hand towels, as they frantically waved their hands and handkerchiefs while screaming for help from the rescue teams below.

For the first time in the country, the Mumbai Fire Brigade also deployed its sophisticated fire-fighter robot, costing around Rs 2 crore and unveiled last week, to battle the blaze in the MTNL Building.

The fire-fighting work continued till late evening but the cause of the blaze is not known, a BMC Disaster Control official said.

The MTNL telephone exchange is located on the busy S.V. Road and as many as 31 fire tenders were rushed to fight the conflagration.

Police cordoned off traffic on the road to enable rescue vehicles rush to the tragedy site, leading to massive traffic snarls on the north-bound sectors in the evening return peak hour.

School Education Minister Ashish Shelar as well as Mayor Vishwanath Mahadeshwar and other top civic and police officials rushed to the spot to supervise the rescue operations.

This is the second major fire to shock Mumbaikars in the past 24 hours.

On Sunday, a fire raged through the third floor of Churchill Chambers in Colaba, claimed one person, while another 14 were rescued by firemen from the burning building.

Maharashtra Congress President Balasaheb Thorat criticized the government for sheer inaction which is claiming lives in building fires in the city almost daily.