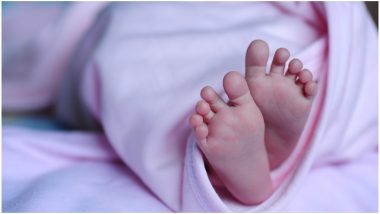 Mumbai, August 11: In a shocking incident, a 25-year-old unmarried woman threw her baby from the sixth floor of her building in Mumbai’s Ghatkopar area. Reports inform that the incident came to light after a milkman alerted the building's security guard about it. According to a report by TOI, the woman has been booked by Pant Nagar police for allegedly throwing her newborn from her apartment in Ghatkopar East area. As soon as the incident was reported, Police reached the spot to take a stock of the situation. The investigation revealed that the woman was admitted to Cooper hospital as she was weak and unwell.

The incident took place on August 4. The security guard informed the secretary after being informed about the incident by the milkman. The baby was lying dead in a pool of blood outside the building. Senior inspector Suhash Kamble informed that the place where the incident took place is Gaurishankar Wadi on August 4. The building residents told police they were unaware of who was pregnant in the building as people stayed indoors and had no information about people in the society due to lockdown. Human Trafficking: Migrant Labourer in Assam Sells 15-Day-Old Daughter for Rs 45,000 Due to Poverty, Police Rescue Baby.

According to the TOI report, a doctor's report said the baby had head injuries and was alive when she was born. Taking into consideration the reports, the Police official further added IPC sections of murder (302) and causing disappearance of evidence (201). The report adds that cops "Officers kept a watch and zeroed in on a young, pale and weak woman. She admitted to the crime," Kamble said.

The TOI report further informs that the Police has booked the woman under IPC section 318 for "secretly burying or otherwise disposing of the dead body of a child, whether such child died before, after or during birth, intentionally concealing or endeavouring to conceal birth of such child". As per law, the woman can be imprisoned for up to two years, or with fine, or both for the crime.

(The above story first appeared on LatestLY on Aug 11, 2020 04:06 PM IST. For more news and updates on politics, world, sports, entertainment and lifestyle, log on to our website latestly.com).