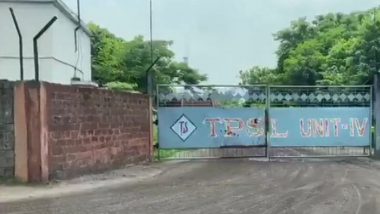 Odisha, July 2: In a shocking incident, seven people received burn injuries due to leakage in a blast furnace at TPSL factory in Lahandabud area of Jharsuguda district on Thursday. All the injured have been referred to a hospital in Rourkela, according to Dr JC Barik, Chief District Medical Officer Jharsuguda.

The explosion reportedly took place after a flame burst inside the blast furnace located in the second floor of the plant, where the seven labourers were working and got critically injured. Explosion at Boiler of Neyveli Lignite Plant in Tamil Nadu, 6 Dead, 17 Injured.

On Tuesday, a gas leak incident was reported from Andhra Pradesh in which a total of two workers lost their lives while four others were hospitalised. The leakage of Benzimidazole gas was reported from Sainor Life Sciences Pvt Ltd in Visakhapatnam.

(The above story first appeared on LatestLY on Jul 02, 2020 03:03 PM IST. For more news and updates on politics, world, sports, entertainment and lifestyle, log on to our website latestly.com).