Over 2,000 Paramilitary Troopers Died on Duty in Last 3 Years: Ministry of Home Affairs

A total of 2,042 security personnel from across the Central Armed Police Forces (CAPFs) died in the last three years in the line of duty, according to the Ministry of Home Affairs (MHA). 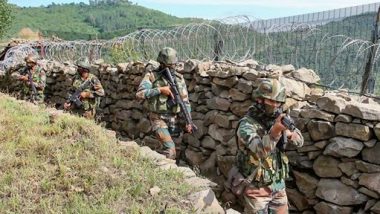 New Delhi, April 3: A total of 2,042 security personnel from across the Central Armed Police Forces (CAPFs) died in the last three years in the line of duty, according to the Ministry of Home Affairs (MHA).

Giving the information in response to a Parliamentary Question, Minister of State for Home Nityanand Rai had said that the these included 47 gazetted officers while the remaining 1,195 were non-gazetted personnel of the general duty cadre.

The Sashastra Seema Bal lost five officials in 2019, 14 in 2020, and five in 2021. Rai also informed that the Welfare and Rehabilitation Board for Central Armed Police Forces provides assistance to the dependents of the deceased personnel, including counseling for their employment.

The next of kin also gets ex-gratia and other type of financial assistance from Risk/Welfare/Benevolent Fund of the Force concerned in accordance with the norms of the Fund and a public contribution up to Rs 15 lakh through 'Bharat ke Veer' online portal. Kerala: Hand Written Maoist Posters Appear in Several Parts in Kozhikode Against CM Pinarayi Vijayan.

Parents of married deceased personnel also get additional financial assistance of Rs 10 lakh to from 'Bharat ke Veer' corpus while an "Operational Casualty Certificate" is issued, entitling them to certain benefits like air and rail travel fare concession and allotment of retail petroleum outlet.

There is compassionate appointment for eligible dependents in accordance with government rules while there are some quota for wards for admission to MBBS and BDS courses, and the Prime Minister's Scholarship Scheme - at the rate of Rs 3,000 per month for girls and Rs 2,500 per month for boys.

The martyrs' family also get compensation/assistance from some states/Union Territories.

(The above story first appeared on LatestLY on Apr 03, 2022 07:52 PM IST. For more news and updates on politics, world, sports, entertainment and lifestyle, log on to our website latestly.com).