The Karnataka Police have arrested two persons in connection with the 'PayCM posters' row that caused severe embarrassment to Chief Minister Basavaraj Bommai and the ruling BJP. 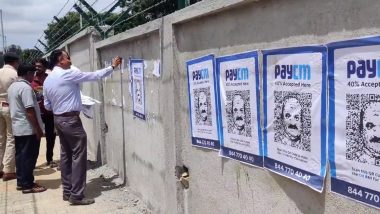 Bengaluru, Sep 22: The Karnataka Police have arrested two persons in connection with the 'PayCM posters' row that caused severe embarrassment to Chief Minister Basavaraj Bommai and the ruling BJP.

The arrested were identified as B.R. Naidu, KPCC social media former chairman and one Gagan Yadav, a resident of Devadandra in K.R. Puram in Bengaluru.

High Grounds and Sadashivanagar police did separate operations and nabbed the accused following the instructions by CM Bommai to initiate the investigation in this connection. Uttar Pradesh: 4 of a Family Die After Wall Collapse in Etawah Due to Heavy Rainfall, 2 Injured; CM Assures Ex-Gratia.

The PayCM posters had come up on the streets of Bengaluru, with CM Bommai's QR code. If the QR code is scanned, it would lead to a page which contained corruption charges against the ruling BJP.

Govt might be able remove these #PayCM posters, but how are they going to justify their corruption to the people of Karnataka?

Everything is for sale in the state for the right price, including the CM’s chair. (₹ 2500 cr) pic.twitter.com/speiZQBpol

Bengaluru Police Commissioner Pratap Reddy stated that the case regarding PayCM posters has been registered under the Public Post Disfigure Act.

The authorities pressed the services of BBMP personnel to take down the posters from walls and other establishments in Bengaluru. BJP MLC M. Ravikumar stated that "Congress leaders have put up our CM's picture to carry out their campaigns, they should make their payments to Rahul Gandhi," he chided.

Answering a question about the 'PayCM' campaign, CM Bommai said that he had ordered an inquiry into the issue to find out who was behind the propaganda. "Anyone can do this with a motive. People will understand, they don't hold ground," he said.

"It's not about my image, they are trying to dent the image of the state and that is why action would be taken against them," he said.

(The above story first appeared on LatestLY on Sep 22, 2022 12:34 PM IST. For more news and updates on politics, world, sports, entertainment and lifestyle, log on to our website latestly.com).