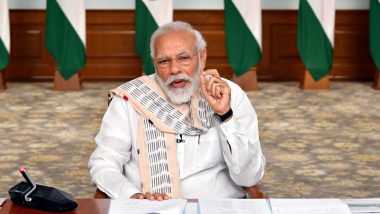 New Delhi, August 6: Prime Minister Narendra Modi will deliver the inaugural address at the ‘Conclave on Transformational Reforms in Higher Education under National Education Policy’ on Friday, i.e. August 7. The Prime Minister will deliver the Inaugural Address at the Conclave through video conference. The conclave is being organised by the Ministry of Human Resource Development and University Grants Commission. The conclave will be streamed live via: MHRD Facebook Page, UGC YouTube Channel, PIB YouTube Channel and UGC Twitter Handle (@ugc_india). It would also be aired on DD News.

According to the official website of the Prime Minister, the conclave will have sessions dedicated to significant aspects of education covered under the National Education Policy, 2020. It will cover a wide range of ideas like Holistic, Multidisciplinary and futuristic education, Quality Research, and Equitable use of technology for better reach in Education.

Union Minister for HRD Shri Ramesh Pokhriyal , Union Minister of State, HRD, Shri Sanjay Dhotre would also be participating in the event. A number of dignitaries including the Chairman and Members, Committee for Draft NEP as well as eminent academicians/scientists will speak on different aspects of the National Education Policy. Vice-Chancellors of universities, Directors of Institutions and Principals of colleges and other stakeholders will participate in the programme.

(The above story first appeared on LatestLY on Aug 06, 2020 02:28 PM IST. For more news and updates on politics, world, sports, entertainment and lifestyle, log on to our website latestly.com).