Rafale Fighter Jets Arrive in India: Aircraft to be Part of Ambala-Based 'Golden Arrows'; Know About 17 Squadron of IAF 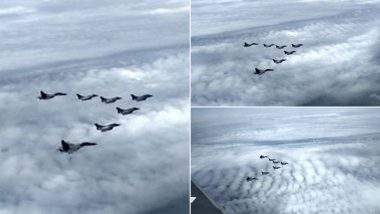 Ambala, July 29: The first batch of five Rafale jets landed at Ambala Airbase of the Indian Air Force (IAF) on Wednesday. The Rafale fleet comprised three single-seater and two twin-seater aircraft. After landing, water cannon salute was given to Rafale aircraft. These fighter jets will be inducted into the “Golden Arrows” or 17 Squadron of the IAF. The “Golden Arrows” were resurrected last year in September by the then Chief of Air Staff Air Chief Marshal Barinder Singh Dhanoa.

The jets flew out from the Merignac airbase of France’s Bordeaux city. After covering a distance of nearly 7,000 km landed at Al Dhafra airbase in the United Arab Emirates on Monday night. Meanwhile, the formal induction ceremony will take place late in August. Rafale Fighter Jets Land in India: 1st Batch of Five 'Omnirole' Aircraft Arrives at Ambala Airbase in Haryana.

The 17 Squadron was formed at Ambala on October 1, 1951, under the command of Flight Lieutenant DL Springett. It was then equipped with Harvard-II B aircraft. By November 1955, the squadron converted fully to De Havilland Vampire. Hawker Hunter aircraft were flown by the 'Golden Arrows' By 1957. The squadron converted to the Mig-21 M in 1975.

The squadron actively participated in several wars and conflicts including the Goa liberation campaign in December 1961. In 1965 war, it was kept as a reserve force. Under the command of Wing Commander N. Chatrath, 17 Squadron took part in the Indo-Pak war of 1971. In the Indo-Pak war of 1971, the “Golden Arrows” provided close air support, and carried out counter-air and fighter recce missions, getting numerous gallantry awards.

Water Salute Given to Rafale Aircraft:

In November 1988, the squadron was presented 'Colours' by then President R. Venkataraman. The Golden Arrows was one of the leading squadrons of the IAF which actively took part in the Kargil war of 1999. Under the command of then Wing Commander BS. Dhanoa, Golden Arrows participated in “Operation Safed Sagar” during the Kargil War.

Defence Minister Rajnath Singh called the development the beginning of a new era in India’s military history. Singh tweeted, “The Birds have landed safely in Ambala. The touch down of Rafale combat aircrafts in India marks the beginning of a new era in our Military History. These multirole aircrafts will revolutionise the capabilities of the @IAF_MCC.” After entering into the Indian airspace, the five Rafale jets were escorted by two Sukhoi Su-30 MKIs to the Ambala Base in an arrow formation.

The Birds have landed safely in Ambala.

The touch down of Rafale combat aircrafts in India marks the beginning of a new era in our Military History.

These multirole aircrafts will revolutionise the capabilities of the @IAF_MCC.

The Rs 59,000 crore deal to purchase 36 Rafale jets were signed by the Indian government in September 2016. Till now India received 10 Rafale jets. Out of which five stayed back in France for training purpose. It is the first time in 35 years that any western aircraft in joining the IAF. The other western aircraft serving in the IAF is Mirage-2000.

(The above story first appeared on LatestLY on Jul 29, 2020 04:20 PM IST. For more news and updates on politics, world, sports, entertainment and lifestyle, log on to our website latestly.com).