The first batch of five Rafale aircraft will arrive in Ambala today to join the India Air Force (IAF) fleet. 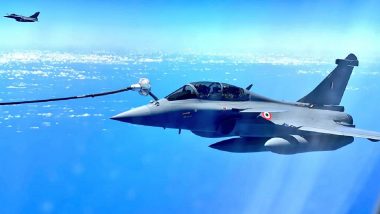 Ambala, July 29: The first batch of five Rafale aircraft will arrive in Ambala today to join the India Air Force (IAF) fleet. These five jets include 3 single-seater and 2 twin-seater aircraft. The first batch of Rafale jets took off from France to join the Indian Air Force on July 27. India Meteorological Department predicted, "generally cloudy sky with one or two spells of rain or thundershowers" for Ambala today.

According to reports, if the weather conditions in Ambala don't permit the landing of Rafale, the IAF airbase in Rajasthan's Jodhpur has been chosen as a backup for the Rafale aircraft. Ahead of its landing, Section 144 was imposed in 4 villages closer to Ambala airbase. Gathering of people on roofs and photography during landing has been strictly prohibited. Ambala Weather Update Ahead of Rafale Landing in India Today: IMD Predicts 'Cloudy Skies With Rain' as Nation Awaits Arrival of 5 Rafale Fighter Aircraft.

On Tuesday, the first batch of five Rafale fighter jets, on their way to India, was seen being re-fuelled mid-air from a French Air Force tanker, and the pictures taken at 30,000 feet were posted on Twitter by the Indian embassy in France. “Indian Air Force appreciates the support provided by French Air Force for our Rafale journey back home,” tweeted Indian Air Force.

(The above story first appeared on LatestLY on Jul 29, 2020 09:57 AM IST. For more news and updates on politics, world, sports, entertainment and lifestyle, log on to our website latestly.com).