Ram Mandir Will Be Modern Symbol of Our Culture And Nationalist Feelings, Says PM Narendra Modi After Bhumi Pujan in Ayodhya 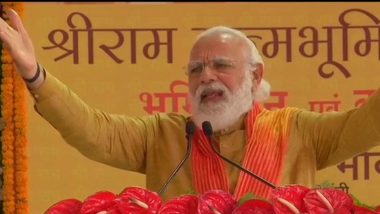 Ayodhya, August 5: Prime Minister Narendra Modi on Wednesday said the Ram temple in Ayodhya will be a "modern symbol" of culture and nationalist feelings. Addressing a gathering after laying the foundation stone for the construction of Ram Mandir, PM Narendra Modi said the Ram Janmabhoomi has got freedom today and the construction of the temple will boost the economy of Ayodhya. PM Narendra Modi's Wisdom Paved Way for Peaceful Resolution of Ram Temple Issue, Says Yogi Adityanath.

"Ram Mandir will become the modern symbol of our traditions. It'll become a symbol of our devotion, our national sentiment. This temple will also symbolise the power of collective resolution of crores of people. It will keep inspiring future generations," PM Modi said. "Ram Janmabhoomi has got freedom today. Like August 15 is Independence Day for the country, today holds a similar significance for crores of those who devoted their lives for the cause of Ram temple," he added. Ram Mandir Bhumi Pujan: PM Narendra Modi Lays Foundation Stone at Ram Janmabhoomi For Construction of Ram Temple in Ayodhya.

Speaking of how the construction of Ram temple will boost the economy of Ayodhya, PM Modi said: "After the construction of the grand Ram temple, not only will the grandeur of Ayodhya increase but the entire economy of the region will also change. New opportunities will be created in every field, opportunities will also increase in every field in the region." The Prime Minister further added that "Ram Janmabhoomi breaks free of the cycle of breaking and getting built again".

Beginning his speech with chants of Jai Siyaram, PM Modi said the religious phrase is resonating not only in the city of Lord Ram but throughout the world. "I express gratitude to all citizens of this nation, Indian diaspora across the world and all the devotees of Lord Ram on today's pious occasion. Today marks the culmination of years of resolve, dedication and struggle. "All who are witnessing today's event, from any corner of the world, are emotional today," the Prime Minister said.

After arriving in Ayodhya earlier today, PM Modi headed to Hanuman Garhi temple where he offered prayers. He then arrived at the Ram Janmabhoomi complex where he offered prayers to Ram Lalla Virajman. The Prime Minister also planted a "Parijat" sapling in the temple complex and then proceeded for the "Bhumi Pujan" ceremony. The construction of the temple is likely to be completed in the next three years. LK Advani on Ram Mandir Bhumi Pujan: 'Historical, Emotional Day...Dream Getting Fulfilled'.

The decades-old dispute over the land between Hindus and Muslims was settled in November last year when the Supreme Court ordered that the site be given to a trust to build a Ram temple, and that alternative land be provided to the Sunni Waqf Board in Ayodhya for a mosque. Following the Supreme Court's verdict, the Centre set up a trust - Shri Ram Janambhoomi Teerth Shetra - to oversee the construction of a Ram temple in Ayodhya.

The Ram temple is built on the site where Babari Masjid once stood. The mosque was demolished by "karsevaks" on December 6 in 1992. Hours before the "Bhumi Pujan" of the Ram temple, the All India Muslim Personal Law Board (AIMPLB) said that the Babri Masjid will remain a mosque because once a mosque is established at a spot, it remains one till eternity.

(The above story first appeared on LatestLY on Aug 05, 2020 01:55 PM IST. For more news and updates on politics, world, sports, entertainment and lifestyle, log on to our website latestly.com).