India's Minister of External Affairs S Jaishankar will not be participating in Canada-led meeting on the coronavirus pandemic scheduled for December 7, reports said. 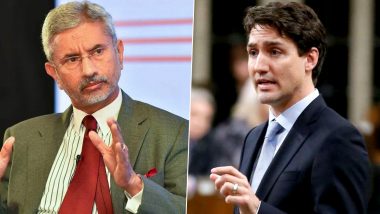 Earlier this week, Justin Trudeau had extended his support to the farmers' protest and said, "I would be remiss if I didn't start by recognising the news coming out of India about the protests by farmers. The situation is concerning, and we are all very worried about family and friends. I know that's the reality for many of you." His comments drew widespread flak with India summoning Canadian envoy.

"Such actions, if continued, would have a seriously damaging impact on ties between India and Canada," the Indian government warned. "We expect the Canadian Government to ensure the fullest security of Indian diplomatic personnel and its political leaders to refrain from pronouncements that legitimise extremist activism," it added.

(The above story first appeared on LatestLY on Dec 05, 2020 12:55 PM IST. For more news and updates on politics, world, sports, entertainment and lifestyle, log on to our website latestly.com).