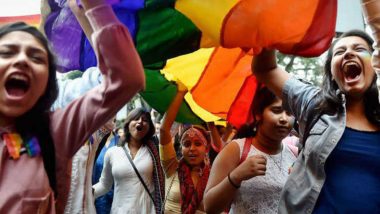 New Delhi, Sep 6: In what is believed to be a landmark judgement in the history of India, the Supreme Court on Thursday struck down the Section 377 of the Indian Penal Code (IPC) which criminalised homosexuality, after months of deliberations. A five-judge Constitution bench, headed by Chief Justice of India (CJI) Dipak Misra and comprising Justices D Y Chandrachud, Rohinton Fali Nariman, A M Khanwilkar and Indu Malhotra, issued the verdict on a bunch of petitions filed to scrap the law.

Celebrations broke out after the verdict as the LGBTQ community and others welcomed the Supreme Court judgment decriminalising consensual gay sex. The Court asserted that the “historic” verdict granted them a basic human right but also acknowledging that complete equality was still some distance away.

Read The Full Text of the Supreme Court Judgement Here

While delivering the verdict,  the CJI observed that criminalising gay sex is irrational and indefensible. The Lesbian Gay Bisexual Transgender community has same rights as any other citizen, the CJI added. The bench unanimously observed that respect for each other's rights and others are supreme humanity while saying that the right to live with dignity is right.

Section 377 of the IPC is a 157-year-old law that criminalised certain sexual acts, terming them as 'unnatural offences', punishable by a 10-year jail term. The law punished "carnal inter­course against the order of nature with any man, woman or animal" and thus had bigger implications for same-sex relationships.

According to reports, the legal battle to scrap the statute has gone on for several years. The Delhi High Court, in 2009, decriminalised homosexuality. But in 2013, the Supreme Court restored the colonial-era law. Three years later, the top court agreed to hear the Section 377 petition once more.

(The above story first appeared on LatestLY on Sep 06, 2018 03:21 PM IST. For more news and updates on politics, world, sports, entertainment and lifestyle, log on to our website latestly.com).