Shah Faesal Quits Politics, Says ‘Why Should I Go Ahead and Show False Dreams to People, As of Now No Idea Where I Will Go Next’ 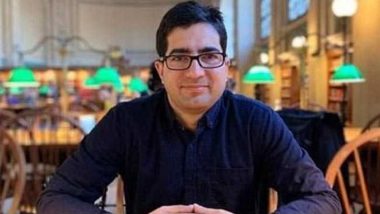 Srinagar, August 11: Indian Administrative Service topper turned politician Shah Faesal who was detained after the abrogation of Article 370 last year said he has quit politics because he cannot show false dreams to people. Faesal said things have changed in Kashmir and he has no power to change them again.

"I was in detention for nearly a year. I thought about the way ahead and I realised that it makes no sense to stay in denial," he said. "Things have changed in Kashmir forever and when I don't have the power to change them why should I go ahead and show false dreams to people? And looking at how we were being abused by those for whom we were in jail I decided to quit politics and move on." Shah Faesal Quits Politics Amid Speculation He May Return to IAS Fold.

Before launching his party Jammu and Kashmir People's Movement (JKPM) in 2019 Faesal had submitted his resignation from the civil services which has not yet been accepted.

About speculation of his return to the civil services Faesal said that he has no idea where he will go next. He said he wants to limit himself to space within the constitution of India and can't show "false dreams to people". "Lot of people have been calling me an Indian stooge since I joined IAS. But so be it. I have no regrets," he said.

He said the 4.5 lakh rupees given to him in crowd funding enabled him to support many cancer patients and pellet victims. "I haven't spent a penny on myself," he said. "This was a great learning experience. But somethings are just not meant to be and everyone should have the freedom to move on," he said.

(The above story first appeared on LatestLY on Aug 11, 2020 09:17 PM IST. For more news and updates on politics, world, sports, entertainment and lifestyle, log on to our website latestly.com).