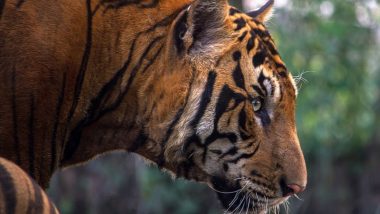 Thiruvananthapuram, January 18: In a bizarre incident a tiger has gone missing from Kolavally in Wayanad, Kerala and has been untraceable for a week. As per reports, the forest officials believe that the tiger has entered the Bandipur Tiger Reserve in Karnataka. A search operation is underway to locate the big cat. The missing tiger is injured and the forest department reportedly said that the wild animal can lose its life if not rescued and treated at the earliest.Leopard Enters Doctors’ Quarters at Chamarajanagar Institute of Medical Sciences in Karnataka; Watch Viral Video.

To locate the tiger, forest officials from Kerala and Karnataka has launched search operations to trace it. However, the wild cat has so far being escape the trap laid down by the authorities. The Karnataka forest officials has also deployed Kumki elephants in the search operation, reported Mirror Now.  Leopard Strolls on Roads at Greater Himalaya National Park in Himachal Pradesh's Kullu, Tourists Step Out of Cars to Take Pictures (Watch Video).

Last week, the tiger entered human settlements in Kolavally, Kerala and created a ruckus and fear among the inhabitants. The seven-year-old wild cat has reportedly attacked a forest range officer and killed three domestic animals in the area, creating panic among the local residents.

(The above story first appeared on LatestLY on Jan 18, 2021 02:43 PM IST. For more news and updates on politics, world, sports, entertainment and lifestyle, log on to our website latestly.com).