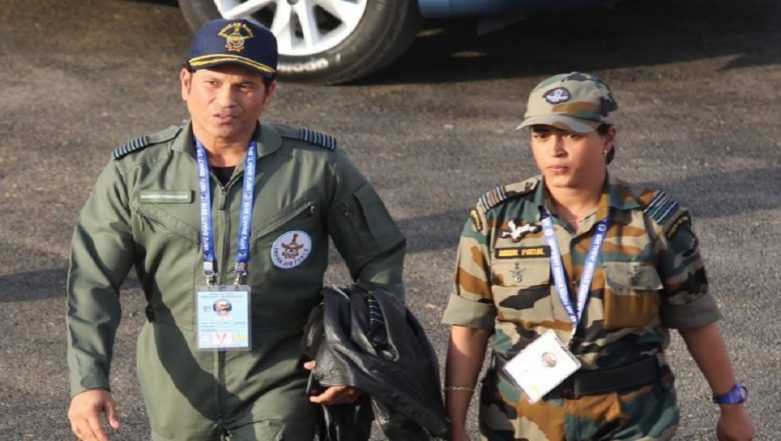 Jaisalmer, February 18: Master Blaster Sachin Tendulkar who is also honourary Group Captain in the Indian Air Force (IAF) attended the Vayu Shakti exercise which was held in Pokhran on February 16. On Monday, Tendulkar shared his pictures during Vayu Shakti 2019. The legendary cricketer felt proud to be associated with the IAF. He tweeted, “The demonstration during the #VayuShakti2019 at Pokhran, Rajasthan on Saturday showcased the full spectrum combat and fire capabilities of the @IAF_MCC. Proud to be associated with such an esteemed institution. #IAF.”

The demonstration during the #VayuShakti2019 at Pokhran, Rajasthan on Saturday showcased the full spectrum combat and fire capabilities of the @IAF_MCC. Proud to be associated with such an esteemed institution. #IAF pic.twitter.com/J3Sq3UZeuC

Vayu Shakti was a day-night exercise which was held in Pokhran on February 16. The exercise is held once in three years. Apart from the Master Blaster, Indian Army chief General Bipin Rawat and IAF chief BS Dhanoa were also present at the venue. The Chief of the Air Staff was received by Air Marshal HS Arora, Air Officer Commanding-in-Chief (AOC-in-C) South Western Air Command.

As a precursor to the Fire Power Display, three Mi-17 helicopters, flying the National Flag, Air Force ensign and the South Western Air Command ensign, flew past the grand stand. These were followed by a Jaguar aircraft at low level taking images of the grand stand and an exciting supersonic run by a Mig-29 fighter aircraft, which left a loud sonic boom in its wake.

#Vayushakti2019 - Mig27 (UPG) a strike aircraft of IAF is capable of carrying a variety of armament. Clubbed with swing wing design, it can operate over a wide range of speeds, making it a potent ground attack platform.

Glimpse of a MiG-27 getting armed with 80mm rockets. pic.twitter.com/Tng6nhWlIT

During the Fire Power Display, various simulated enemy targets on ground and in air were targeted and destroyed employing a variety of missiles, precision-guided munitions, unguided bombs and rockets by various fighter aircraft of the Indian Air Force that included the Su-30, Mig-27, Mig-29 upgrade, LCA-Tejas, Mirage-2000, Mig-21 Bison and Hawk and also the weaponised version of the indigenous Advanced Light Helicopter. Vayu Shakti 2019: Dress Rehearsals Held in Pokhran on Thursday, Indian Air Force to Showcase Strength on Feb 16.

#Vayushakti2019 : Griffin Laser Guided Bomb (LGB) is a laser-guided bomb system. It is an add-on kit which is used to retrofit gravity bombs, making them into laser-guided smart ammunition.

A Su-30MKI Pilot briefs about the LGB, dropped at Pokhran during exercise Vayushakti. pic.twitter.com/G4acNHjokm

During the night, the indigenous Surface-to-Air Guided weapon: the Akash missile, knocked out a target flying in the sky above. It was followed by Mi-17V5 and Mi-35 helicopters raining rockets on simulated enemy targets. Su-30, Jaguar and Mig-27 upgrade aircraft resumed operations and destroyed the remaining targets with accuracy, displaying the IAF’s operational capability by night.