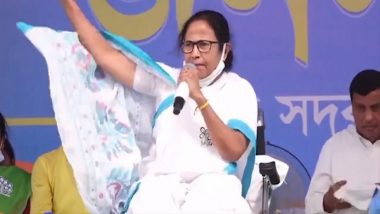 Kolkata, April 12: The Election Commission on Monday imposed a 24-hour ban on Mamata Banerjee for campaigning in the West Bengal Assembly Elections 2021. The West Bengal Chief Minister was barred from campaigning in  the ongoing state Vidhan Sabha polls for violating the "Model Code of Conduct and Representation of the People Act 1951". The order will come into force from 8 pm on April 12. Mamata Banerjee Instigated People Leading to Cooch Behar Deaths: Amit Shah.

The EC, in its order, said that Banerjee made "highly insinuating and provocative remarks laden with the serious potential of the breakdown of law and order," which would adversely be affecting the election process. Mamata Banerjee threatened to sit on dharna against the EC order.

Election Commission of India imposes a ban of 24 hours on West Bengal Chief Minister Mamata Banerjee from campaigning in any manner from 8 pm of April 12 till 8 pm of April 13 pic.twitter.com/FFNL2KvVxv

The West Bengal CM called the EC order  undemocratic and unconstitutional. She will sit on a dharna against it on April 13  at Gandhi Murti, Kolkata from 12 noon. Trinamool Congress leader Derek O'Brien termed the EC's move as "a Black Day in our democracy."

To protest against the undemocratic and unconstitutional decision of the Election Commission of India, I will sit on dharna tomorrow at Gandhi Murti, Kolkata from 12 noon: West Bengal Chief Minister Mamata Banerjee

The Bharatiya Janata Party (BJP) had filed the complaint against the TMC supremo after, on April 3, Banerjee asked the Muslim community not to divide their votes. She reportedly made the appeal during her election campaigning in Hooghly. Sitalkuchi Firing By CISF Guards: Mamata Banerjee Calls It Genocide.

The assembly elections in West Bengal are taking place in eight phases from March 27 to April 29. The result will be declared on May 2 along with Tamil Nadu, Kerala, Assam and Puducherry. West Bengal is witnessing a tough contest between the ruling TMC and the BJP. Banerjee is seeking the third consecutive term as the CM of the state, while the BJP is aiming to come to power in West Bengal. The Congress is contesting the election in alliance with left parties.

(The above story first appeared on LatestLY on Apr 12, 2021 08:40 PM IST. For more news and updates on politics, world, sports, entertainment and lifestyle, log on to our website latestly.com).