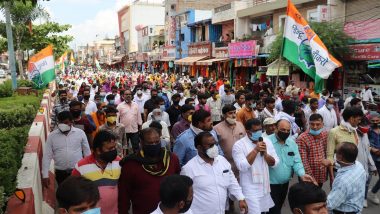 Indore, July 27: A local Congress leader and several others were booked for holding a rally to protest against what they claimed were harsh lockdown rules amid the coronavirus outbreak, police said.

Nearly 300 Congress workers took part in the rally and its leader Chintu Choukse and four others were booked under section 188 (disobedience to order duly promulgated by public servant) 269 (negligent act likely to spread infection of disease dangerous to life) 341 (wrongful restraint) 285 (negligent conduct with respect to fire or combustible matter), a sub inspector with Pardeshipura police station said. Gujarat Congress President Amit Chavda Among 60 Detained for March Towards Raj Bhavan Against BJP Over Rajasthan Political Crisis.

More participants will be booked based on CCTV footage, the official added. Eye-witnesses said the protesters set an effigy of Chief Minister Shivraj Singh Chouhan on fire, and the flames were doused by policemen at the site. Indore currently has 6,985 COVID-19 cases, including 304 deaths, while 4,699 have been discharged.