Darauli (Vidhan Sabha constituency) is a Legislative Assembly constituency in Siwan district in the Indian state of Bihar. The voting in the Darauli constituency will be held in the second phase of Bihar Assembly Elections 2020 on November 3. 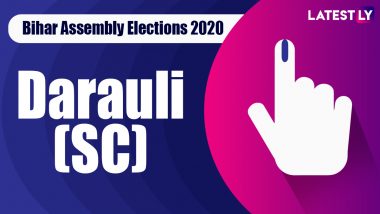 Bihar, October 27: Darauli (Vidhan Sabha constituency) is a Legislative Assembly constituency in Siwan district in the Indian state of Bihar. It is reserved for scheduled castes from 2010. Earlier it was an open seat. The voting in the Darauli constituency was held in the second phase of Bihar Assembly Elections 2020 on November 3. Counting of votes in the Darauli (SC) was held on November 10 and the results were also declared on the same day. CPIMLL's Satyadeo Ram won from this seat in Bihar Assembly Elections 2020.

Satyadeo Ram was elected as the MLA from the area. He is one of the prominent leaders of Communist Party of India (Marxist–Leninist) (Liberation) from Siwan district. The Bihar assembly elections were held in three phases on October 28, November 3 and November 7, followed by counting of votes on November 10. The Bihar election is one of the biggest elections globally during the COVID-19 pandemic. Benipur Vidhan Sabha Seat in Bihar Assembly Elections 2020: Candidates, MLA, Schedule And Result Date.

The contesting candidates for Bihar Elections 2020 from the seat were Ramayan Manjhi from BJP, Satyadeo Ram from Communist Party of India among others. Rashtriya Janata Dal got 80 seats in the 2015 Assembly elections, while Janata Dal (United ) managed to win 71 seats. Bharatiya Janata Party won 53 seats and Congress won 27 seats.

According to the IANS-C Voter opinion poll, the ruling JD(U)-BJP combine or the NDA will return to power in Bihar. In 2015, Nitish Kumar became the chief minister forming an alliance with the Bharatiya Janata Party.

(The above story first appeared on LatestLY on Nov 10, 2020 11:27 PM IST. For more news and updates on politics, world, sports, entertainment and lifestyle, log on to our website latestly.com).