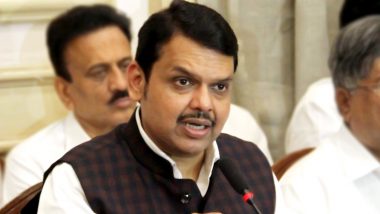 Nagpur, September 21: Senior Maharashtra BJP leader Devendra Fadnavis on Monday said the opposition to the Centre's agriculture bills, passed in Lok Sabha and Rajya Sabha recently, was not from farmers but those with vested interests. Several political leaders were protesting to ensure their relevance remains in the sector, Fadnavis said.

He said the Congress had given assurances to farmers in its 2019 manifesto but it was the Narendra Modi government at the Centre that had fulfilled promises made to cultivators. He said the bills passed in Parliament would allow farmers to go in for contract farming, bring investment into the sector and also reduce the burden of farmers as it has done away with several taxes and cess. Farm Bills: What Are The 3 Legislations Brought by Modi Government? Why Are Farmers Protesting? All You Need to Know.

"Farmers can now sell their produce as per their choice without having to pay any cess or tax. These bills are revolutionary," he claimed. He said the contract farming act was brought by the Congress in Maharashtra in 2006 and it has helped farmers, like creation of tomato and potato value chains in Nashik.

He also attacked the ruling Shiv Sena and claimed the Uddhav Thackeray-led party had no stand on the agriculture sector and was confused about farmers' demands and rights.