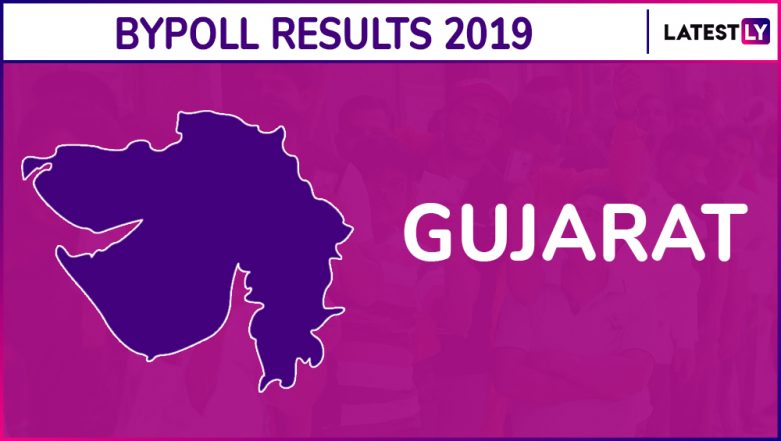 Gandhinagar, May 23: The counting of votes for four assembly seat in Gujarat has begun at 8 am today. The result will be declared by the evening on the same day. The bypolls on four assembly seats - Dhrangadhra, Manavadar, Unjha and Jamnagar (Rural), which fall under Lok Sabha constituencies of Surendranagar, Porbandar, Mehsana and Jamnagar, respectively. The Bharatiya Janata Party (BJP) candidate Patel Raghavjibhai Hansrajbhai has won from Jamnagar (Rural) assembly seat, while the saffron party is leading on the remaining three seats. The voting on these seats was held in the third Phase of Lok Sabha elections along with 26 parliamentary seats on April 23. Gujarat Lok Sabha Elections 2019 Schedule: Constituency Wise Dates Of Voting And Results For General Elections.

Initially, the Election Commission of India (ECI) had notified by-elections on a total of five assembly seats in Gujarat to be held simultaneously with the Lok Sabha elections. However, the Supreme Court later stayed bypoll on the Talala assembly constituency in Junagadh district. A total of 45 candidates were in the fray on these four seats, won by the opposition Congress in the 2017 polls. Catch complete coverage of Lok Sabha Elections 2019 here.

Three of the four sitting Congress lawmakers who had resigned to join the BJP had been fielded by the ruling party from their respective seats. These candidates are Jawahar Chavda (Manavadar), Asha Patel (Unjha) and Parsotam Sabariya (Dhrangadhra). The BJP had fielded another former Congress leader and ex-lawmaker Raghavji Patel from Jamnagar (Rural). Currently, the BJP had 99 seats in the 183-member assembly, while the Congress has only 68 seats.

Meanwhile, various exit polls predicted the BJP victory in Gujarat Lok Sabha elections. The saffron party is expected to win 24-26 Lok Sabha seats, while the Congress is likely to win 0-2 seats. The voting on these 26 parliamentary constituencies took place in the third phase of the Lok Sabha elections on April 23.