If Govt and Opposition Fight With One Another, When Will We Combat China, Says AAP Leader Sanjay Singh 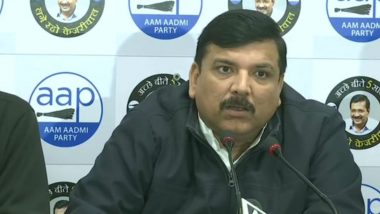 Lucknow, June 28: AAP leader Sanjay Singh on Sunday said that if the ruling party and the Opposition engage in "do do heath" (fighting) amongst themselves then when will they fight against China.

"If we fight with one another then when will we fight against China. 20 soldiers have made the supreme sacrifice to free Indian territory from China. This is time to chase away Chinese from our land. If we want to avenge the martyrdom of our soldiers then the ruling and opposition parties should come together and make a policy on how to give a reply to China. If we fight amongst ourself, it is of no use," Singh told ANI. Kapil Gujjar AAP Member? Sanjay Singh Counters Charge, Shares Spree of Photos of BJP Leaders With 'Rapists, Murderers, ISI Agents'.

The senior AAP leader stated, "I feel that the BJP and Prime Minister Narendra Modi are speaking the same language which China is speaking. I am sad about this because the country has lost 20 Jawans. In this time they are saying that China has not occupied an inch of India's land. This is what China is saying also that they have not occupied India's land."

"Why are there foreign ministerial-level talks? Why there were army officer-level talks? Why is there a tussle between Indian and Chinese armies? Our 20 soldiers became martyrs to free our land from China and you are saying that Chinese have not captured one inch of our land," he said.