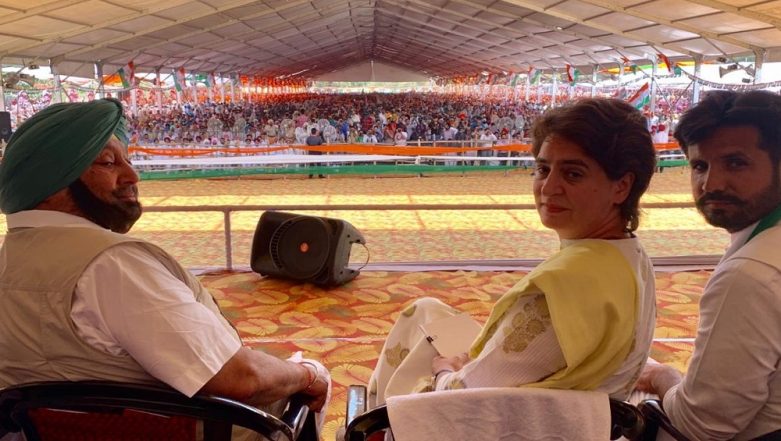 Bathinda, May 14: Congress General Secretary Priyanka Gandhi Vadra, here on Tuesday, attempted to establish a link with local voters by saying as the wife of a Punjabi she felt at home in Punjab and among its people. She also hailed the valour of Punjabis and their ability to remain happy in all circumstances. Addressing a public rally, in support of Congress candidate Amrinder Singh Raja Warring, Priyanka asked people to teach a lesson to the Bharatiya Janata Party (BJP) and the Shiromani Akali Dal (SAD) for harassment meted out to them.

While taking on Narendra Modi for brazenly lying and cheating to further his political interests, the Congress leader criticised the SAD on the issues of sacrilege and mafia rule during their regime. Describing Punjab as the land of gurus and criticising Akalis for sacrilege, Priyanka said those who destroyed Sri Guru Granth Sahib were destroying the soul of Punjab. Priyanka Gandhi Targets PM Narendra Modi on 'Jobs' in 1st Rally Post Political Entry at CWC Meeting in Gujarat.

Priyanka, accompanied by Chief Minister Amarinder Singh, appealed people to strengthen the Congress with their vote in this battle 'for the future of India' and to teach arrogant Harsimrat Kaur Badal, SAD candidate from Bathinda, a lesson for the Akali misdeeds.

Pointing to the poor response to Modi's Monday rally at the same ground, Priyanka hailed people for their befitting reply to the Prime Minister's saga of false promises. Taking a dig at Modi's 'radars in clouds' remark, she said the Prime Minister's truth had come on the people's radar and it was time for him to focus on unfulfilled promises.

Lambasting the Akalis, she said they had handed over the state to drugs, liquor, sand and transport mafia during their 10-year-rule. If Punjab's youth were being destroyed by 'chitta', it was because of the BJP and the Akalis, she said. She said when Rahul Gandhi raised the drugs issue before the Assembly elections, they (Akalis) ridiculed him, only to be exposed later.

As many as 12,000 debt-ridden farmers had committed suicide during the Modi rule and farmers were getting neither proper prices for their crops nor requisite seeds and other facilities, Priyanka said. The Prime Minister refused to spare even five minutes to listen to woes of farmers, she alleged.