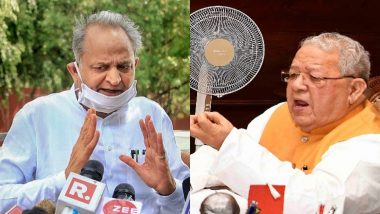 Jaipur, July 27: Rajasthan Governor Kalraj Mishra wrote to the State Cabinet, seeking deliberation on three aspects in case a no-confidence motion would be moved in the Assembly after reconvening the House. The points raised by the Governor include a 21-day notice period issued to legislators and implementation of social distancing norms in the Vidhan Sabha.

The statement issued by the Raj Bhavan categorically ruled out the charge that Governor Mishra does not intend to issue the order for re-convening the Assembly. The Governor, it added, is only concerned that certain rules which are prerequisite for a floor test are adhered to by the government. Ashok Gehlot Vs Sachin Pilot: Rajasthan Assembly Speaker CP Joshi Withdraws His Plea in Supreme Court Against HC Order.

The statement by Raj Bhavan came shortly after Chief Minister Ashok Gehlot said he spoke with Prime Minister Narendra Modi over the phone, asking him to ensure that the rights of a democratically-elected provincial government are not usurped.

Gehlot and the Governor are at loggerheads since the past week, after the Chief Minister's request to reconvene the Assembly was not effectively addressed in a time-bound manner. A protest was staged at the Raj Bhavan premises on Friday by the legislators supporting Gehlot.

Congress leaders across the nation held demonstrations outside Raj Bhavans as part of their "Speak Up For Democracy" campaign. The party has accused the Centre-ruling BJP of conspiring to topple the Opposition-ruled state governments amid the COVID-19 pandemic.

(The above story first appeared on LatestLY on Jul 27, 2020 04:56 PM IST. For more news and updates on politics, world, sports, entertainment and lifestyle, log on to our website latestly.com).