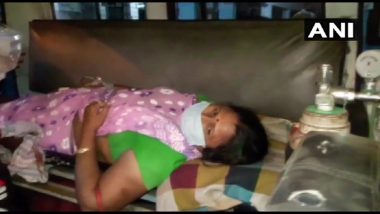 Kolkata, July 4: A member of the West Bengal-ruling Trinamool Congress (TMC) party was shot at by an unknown assailant on Saturday. The incident was reported in Barrackpore, the town located close to Kolkata. The victim was rushed to a hospital, and is reported to have sustained injuries on her leg. BJP Worker Shot at in East Midnapore's Khejuri Area After Clash With TMC Supporters.

The female TMC member who was fired upon has been identified as Champa Das. She is the party councillor from ward number 2 of North Barrackpore Municipality. The attacker reportedly succeeded from fleeing from the spot of crime after firing upon her.

The police officials were informed after the shooting took place. A team of cops have launched a search operation to identify and nab the miscreant, reports said.

West Bengal: Champa Das, Trinamool Congress councillor from ward number 2 of North Barrackpur Municipality, has been shot at by miscreants. She has been admitted to a hospital. https://t.co/qPWpFSMv2d pic.twitter.com/avJZlNQvtu

The incident was reported a day after a Trinamool worker, along with a member of Socialist Unity Centre of India (Communist), was found dead in South 24 Parganas district. Their corpses were recovered from Kultali area of the district, where members of both the outfits had clashed earlier on Friday. The deceased were identified as TMC's Ashwini Manna and SUCI's Sudhanshu Jana.

(The above story first appeared on LatestLY on Jul 04, 2020 10:37 PM IST. For more news and updates on politics, world, sports, entertainment and lifestyle, log on to our website latestly.com).