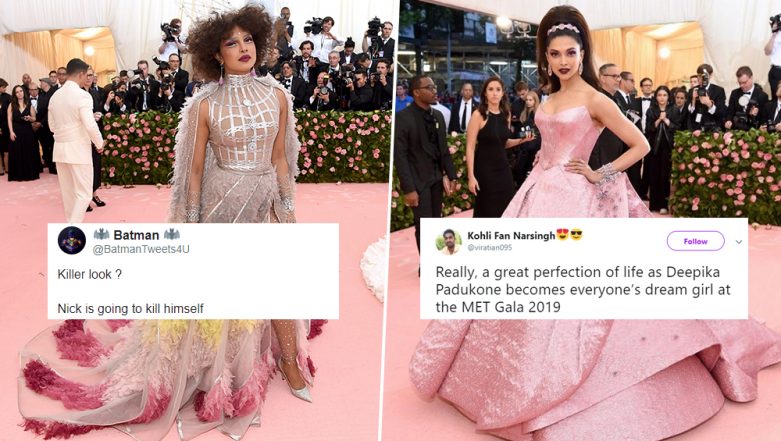 The Met Gala 2019 has finally started and the pictures have got Twitterati talking. This year's theme is 'Camp: Notes on fashion.' So, naturally, you had to see the outrageous and experimental outfits coming. Bollywood beauties Priyanka Chopra and Deepika Padukone's appearance here was much awaited, especially by desi fans. Both the actresses looked stunning but then Twitterati was already ready with their judgemental tweets. Lady Gaga Practically Stripped From A Gown To Shimmery Lingerie As She Walked The Met Gala 2019 Red Carpet - Watch Video!.

A gentle reminder: The celebs were supposed to be in the specific attires so the experiment was an eminent part of this. As expected, Priyanka stuck to it and came out with a rather bold choice with the Dior Gown. Not just that, she even experimented with her hairdo as she showed up in a curly bob with a crown placed on it. Well, how many can honestly pull off that look? But the diva got trolled badly by her desi fans.

On the other hand, Deepika Padukone too looked beautiful in a pink gown with a dark lipstick on. However, it was less experimental than the others at the Met Gala 2019 event. However, the fans here were quite happy with her decent and non-experimental look and showered heaps of praises on her 'Disney princess' look.

Nick is going to kill himself

Deepika Padukone is really fantastic at MET Gala 2019 she is such a beautiful woman... pic.twitter.com/z5904nlGsa

Deepika Padukone turning all the heads at the MET Gala 2019 for extremely beautiful look pic.twitter.com/R1UnXrBmb7

Well, Twitterati has come out with its own verdict. But it is also important to note that the themes are made for a reason and if one chooses to go out of the comfort zone, it should be welcomed! Don't you think so? Tell us your take in the comments section below.