CISF Raising Day 2021 Date, History and Significance: All You Need to Know About the Day Dedicated to Central Industrial Security Force

If you want to learn more about CISF or CISF’s Raising Day, then you have reached the right place. At LatestLY, we tell all you need to know about the CISF Raising Day 2021 – its date, observance, celebrations, and significance. 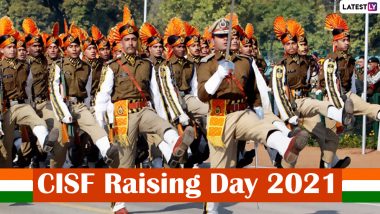 CISF Raising Day 2021 Details: The Central Industrial Security Force (CISF) works, and is popularly known, as the Central Armed Police Forces in our country. The CISF is governed by the Union Home Ministry. The agency’s motto is ‘Protection and Security’. It will be the 52nd anniversary of the foundation of the CISF this year. There are official felicitations and programs held in different parts of the country, especially Delhi. If you want to learn more about CISF or CISF’s Raising Day, then you have reached the right place. At LatestLY, we tell all you need to know about the CISF Raising Day 2021 – its date, observance, celebrations, and significance.

The CISF operates throughout the length and breadth of the country. Duties such as safeguarding the top governmental buildings, airport security, and looking after Delhi Metro are paramount responsibilities. Not many people know that the CISF looks after over 300 industrial units, atomic power plants, space stations, oil field, steel plants, and scores of other sensitive and secretive places in India. Not just that, the CISF also provides consultancy services to crucial industries and industrialists in the country.

There are several ceremonial parades held across the country, especially in Delhi, where the headquarters of CISF are located. Brave personnel who were nominated for their heroic acts and deeds in the previous year are rewarded with medals for their bravery shown in the last year, and safeguarding the country’s security. Some CISF personnel are also rewarded with Police and Fire Service medals for the commendable, meritorious, and distinguished services.

Hence, celebrating the CISF Raising Day would be a fitting tribute to those people who have braved all the odds and kept the sovereignty and security of our intact. We at LatestLY wish you all a very Happy CISF Raising Day 2021. Do share this information with your loved ones on this amazing day.

(The above story first appeared on LatestLY on Mar 09, 2021 04:12 PM IST. For more news and updates on politics, world, sports, entertainment and lifestyle, log on to our website latestly.com).