Durga Puja 2018: Idols of Goddess Durga for Navaratri Are Made With Soil From Sonagachi Brothels, Here's Why! 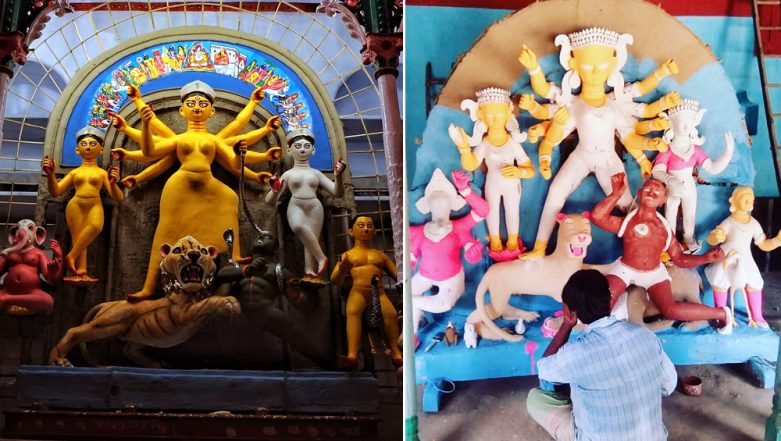 The festival of Navaratri 2018 will begin from October 10 and continue for the next 9 days. The preparations for the welcome of Goddess Durga have begun and each festival in the country has its unique way of celebration. In fact, Navratri is celebrated in varied ways in different states, each state calling it by different names and the festivities also differ. The diety of worship also differs with different Goddess being worshipped in different parts of the country. Durga Pujo in Eastern states of the country carries its own vibe and enthusiasm. There are a set of traditions attached to Durga Puja, right from the idol-making to the puja rituals. The soil from which the idols are made is taken from Sonagachi, a red light area of Kolkata.

The idol making of Goddess Durga starts months in advance and one of the important element of making these idols is the soil and clay with which they are made. The soil used to make Maa Durga idol is collected from brothels, also called the punya maati (blessed soil). The soil is collected from Nishiddho Pallis which are forbidden territories. Festive Season Trains: Indian Railways Announces Special Trains for Durga Puja, Dussehra, Diwali; Check Schedule Here.

Earlier a priest used to go to brothels and beg for some clay. This clay mixed with soil was used to make the idols. If the sex-worker denied giving the clay, they would have to convince them, continue to beg till they agreed. And after receiving some clay, the priests recited some chants on it.  It is a tradition that has been followed since years and there are different reasons to it. But nowadays it is the artists who go to the brothels to collect the soil and clay.  Let us tell you the reasons behind the tradition.

The soil outside a brothel is thus considered the purest form and is thus used to make the Durga idol. It is amazing how the tradition and rituals have some such deep symbolism. Although the idea of respecting women and womanhood should not be just for these days but continue throughout the year, it is important we remember the very message while we pay respects to the Goddess.