Gujarat Day 2020 History and Significance: Why Is May 1 Celebrated as Gujarat Formation Day? Here Is What You Need to Know 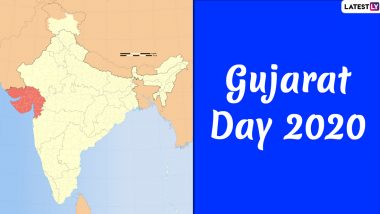 While we are in lockdown, the country will celebrate May 1 as an International Labour day. Every year the day is dedicated to the labourers and their hard work. However, the states of Maharashtra and Gujarat celebrate May 1 as 'Maharashtra Day' and 'Gujarat Day', respectively. May 1 is celebrated with great enthusiasm and fervour in both the states and is also declared as a public holiday. It was only on May 1 when both the existing states of Maharashtra and Gujarat were formed into two individual states. In both these states, May 1 is celebrated in different ways and people organise big events. International Workers' Day 2020 Date: Know The History, Origin And Significance of Labour Day Dedicated to Workers Across The Globe!

History and Significance of Gujarat Day

The history behind the May 1 celebrated as Maharashtra Day and Gujarat Day in Maharashtra and Gujarat respectively, dates back 57 years ago, when the two states were formed. The day holds immense importance for both the states as they became independent of each other.  Initially, Mumbai was called Bombay and the city consisted of people speaking various languages such as Marathi, Gujarati, Kutchi, and Konkani, but soon the Sanyukt Maharashtra Andolan began demanding a separate state.  This lead to a lot of protests which continued till 1960. However, the Bombay Reorganization Act was passed in that year itself by India's Parliament. This way the two states were divide into separate multilingual states Gujarat and Maharashtra. The legislation came into effect on May 1, 1960.

The idea of the foundation of Gujarat was cropped up in the year 1928 in a magazine called Kumar and in about nine years, writer and freedom fighter K M Munshi first suggested a concept called Mahagujarat during a meeting of the Gujarat Sahitya Sabha, held in Karachi in the year 1937. However, the rest of the world celebrates International Workers' Day, also known as Labour Day on May 1. While it is observed as International Workers' Day or Labour Day in most countries, the tradition has origins in pagan festivals celebrated during the spring season.

(The above story first appeared on LatestLY on Apr 28, 2020 03:18 PM IST. For more news and updates on politics, world, sports, entertainment and lifestyle, log on to our website latestly.com).