Guru Tegh Bahadur Jayanti 2022: Date, Significance and Everything To Know About 400th Prakash Parv Celebrating the Birth of the Ninth Sikh Guru

Guru Tegh Bahadur is remembered as the protector and warrior guru who relentlessly fought for religious freedom for all. He played a significant role in the protection of people from forceful conversion to Islam during the Mughal rule in 1675. This Year marks the 400th birth anniversary of the Ninth Guru. Read to know everything about the Ninth Guru's Birthday. 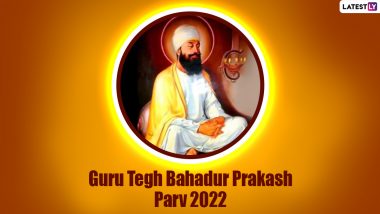 Guru Tegh Bahadur is renowned for his devotion to Guru Nanak Devs' teachings, His poetry and is widely regarded as the warrior guru. Guru Tegh Bahadur believed that strength should be gained by freedom from fear and dependence.

During the time of the Mughal rule, there were persecutions of the Hindus and the demolition of Hindu temples. People were forced to convert to Islam under the reign of Mughal Emperor Aurangzeb. During this time of persecution, Guru Tegh Bahadur spoke out. He was beheaded in Delhi in 1675 for refusing to convert to Islam. His execution site was later converted into a notable Gurdwara. The day of his execution is observed as Guru Tegh Bahadur Martyrdom Day on November 24.

The Prakash Parv is celebrated to mark his birth anniversary and remember his life and teachings. His teachings have impacted essential findings in Sikhism. Guru Tegh Bahadur Ji is also the father of the Tenth Guru Gobind Singh and he is also the founder of Anandpur, which later became the centre for Sikhism.

People celebrate his birthday by holding religious processions, visiting Gurudwaras, organizing Shabad Kirtans and reading about his life’s work. On the occasion of his 400th Birth Anniversary, the Government has announced that they will be releasing special coins and stamps to commemorate the life and achievements of Guru Tegh Bahadur. And the Prime Minister will be giving a speech from the Red Fort.

(The above story first appeared on LatestLY on Apr 19, 2022 12:28 PM IST. For more news and updates on politics, world, sports, entertainment and lifestyle, log on to our website latestly.com).