International Beer Day 2020 Date and Significance: Know History of This Observance That Celebrates the Craft of Brewing 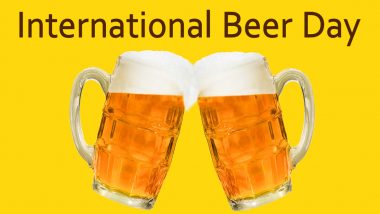 Do you love drinking beer? Do you know there's an entire day that celebrates drinking beers? Yes, an International Beer Day is marked every year on the first Friday of August. This year, International Beer Day thus falls on August 7. Beer is one of the most widely consumed alcoholic drinks in the world, also among the oldest ones. It is a brewed beverage from cereal grains— most commonly from malted barley, wheat, maize, and rice. International Beer Day is a day that celebrates the art of crafting beers and as a day to appreciate those involved in the beer-making process. Ahead of this day, we tell you more about the history, significance and celebrations. Beer Cart, Robotic Barman Serves Contact-Free Beers in Spain Amid Coronavirus Pandemic.

International Beer Day celebrations began in the year in 2007 in Santa Cruz, California. From its inception to now, it has evolved into a worldwide celebration that is observed by over 80 countries spanning six continents. It was started by Jesse Avshalomov to celebrate and appreciate the people involved in the making of beer. The observance gradually expanded in scope after it included bartenders and other beer technicians. Within a year, this seemingly local celebration went on to gain international recognition. Crafters from different breweries get together to share their experience and techniques of how to make beer and also enjoy the beverage together. One of the other reasons to mark this day is to unite the people by celebrating the beers of all nations together on a single day. Celebrate World Gin Day 2020 With These Easy Cocktail Recipes at Home and Say Cheers to The Weekend (Watch Videos).

So typical celebrations of beer day will see special offers in hotels and bars on beers. There are several events that have beer drinking along with games and prizes. People tap into new and rare beers, there are all-day happy hour schemes, binge drinking games and interesting beer food pairings.

(The above story first appeared on LatestLY on Aug 06, 2020 09:00 PM IST. For more news and updates on politics, world, sports, entertainment and lifestyle, log on to our website latestly.com).