International Mother Earth Day 2020: History And Significance of Day Dedicated to The Planet

The International Mother Earth Day is observed on April 22 every year. 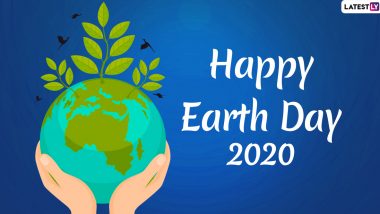 The earth is facing the brunt of human activities such as pollution, deforestation and urbanisation. Despite ongoing efforts, biodiversity is deteriorating worldwide at rates unprecedented in human history. Climate change and global warming are global crises. It is estimated that around one million animal and plant species are now threatened with extinction. Amid these environmentally-challenging times, the observance of International Mother Earth Day assumes significance. How To Celebrate Earth Day 2020 At Home: From Making Upcycled Craft to Virtual Field Trips, Here's How You Can Do Your Bit For The Planet.

The Internation Mother Earth Day is observed to raise awareness about issues that lead to nature's suffering. The day highlights the duties of all people on this planet towards the environment and eco-system. The term Mother Earth is used because it "reflects the interdependence that exists among human beings, other living species and the planet we all inhabit".

According to the UN resolution, the International Mother Earth Day recognizes that "the Earth and its ecosystems are our home" and that "it is necessary to promote harmony with nature and the Earth." The first Earth Day was organised by Denis Hayes on April 22 in 1970. The event brought out 20 million Americans, 10 percent of the United States population at the time,  and helped spark the modern environmental movement.

Earth Day led to the passage of landmark environmental laws in the United States, such as the Clean Air, Clean Water and Endangered Species Acts. Many countries soon adopted similar laws, and in 2016, the United Nations chose Earth Day as the day to sign the Paris Climate Agreement into force.

(The above story first appeared on LatestLY on Apr 22, 2020 07:30 AM IST. For more news and updates on politics, world, sports, entertainment and lifestyle, log on to our website latestly.com).