Makar Sankranti is the harvest festival which marks the shift of sun’s position in Capricorn. A lot of recipes made have sesame and jaggery because they are perfect for winter. 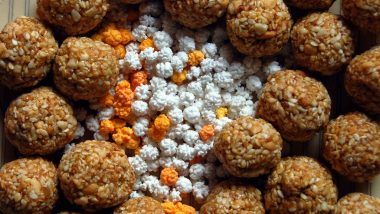 The first festival of the new year is here. Makar Sankranti signifies a new beginning of the astronomical calendar. Celebrated every year on the 14th of January, Makar Sankranti is the harvest festival which marks the shift of sun’s position from the Tropic of Cancer to the Tropic of Capricorn. The sun starts its northward journey also known as Uttarayan. Since it is a new beginning, there is of course enthusiasm attached to the festival. There are some traditional dishes which are prepared for the festival. Take a look at some of the simple recipes you could try for Makar Sankranti 2018:

Tilgul: The most common greeting of wishing someone for Makar Sankranti is ‘Til, gud ghya ni god god bola.’ The phrase literally translates to ‘eat til and speak sweetly.’ So a tilgul is the most basic preparation made for the festival in almost every household.

Tilgul is made with sesame seeds and jaggery both of which are winter-perfect foods that help to keep the body warm. The oil present in the sesame seeds helps one to generate body heat, which is necessary since the atmosphere is colder this time of the year. Jaggery helps to keep a good immunity.

See how to make this traditional sweet:

Peanut Chikki: Chikki is a quiet common sweet snack which most of us have even regularly. You could call it a traditional sweet candy replacing chocolates after a meal. But during the festival of Makar Sankranti, several families make the Chikki at home.

See how you can make Chikki at home:

Til Poli: Tilpoli, a typical Maharashtrian delicacy is making a roti out of sesame and jaggery. Given the auspicious value til has during the festival, a filling of til is made and put in the dough. Take a look at the entire recipe:

Tilkut: Tilkut also known as Tilkuta is pounded sesame and groundnut which is sometimes even served as prasad in festivals. It is a powdery sweet made with sugar and also has dry fruits. It is easier compared to making til ladoos. Check out the recipe here:

Jaggery roti (Gulpoli): Like we mentioned earlier, jaggery helps to boost immunity in the winter season. For those who do not really like Til, you can definitely enjoy this sweet paratha made of jaggery. Called the Gulpoli, it is also made during the festival of Holi, along with Sankranti. Check how you can do this:

We usually make something sweet to celebrate an occasion. Given the winter season, sesame and jaggery preparations are very common. In fact, the tilgul is also popularly made even in Lohri celebrations. These delicacies also have a longer shelf life so they are stored as snacks for a longer period of time. Also, what’s a festival without indulging in some sweet delights? We wish you all a Happy Makar Sankranti.

(The above story first appeared on LatestLY on Jan 12, 2018 01:44 PM IST. For more news and updates on politics, world, sports, entertainment and lifestyle, log on to our website latestly.com).