National Youth Day is observed annually on 12th January to celebrate the birth anniversary of Swami Vivekananda. He was a spiritual thinker who was very vocal about the importance of youth in the process of nation-building. 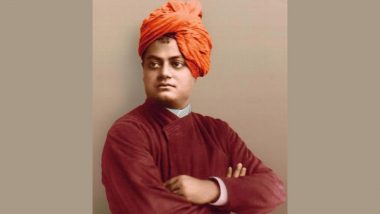 1. Swami Vivekananda's Pre-monastic name was Narendra Nath Datta. He was born with a temperament of yogis and used to meditate at a very early age.

2.  Swami Vivekananda had very poor English Grammer skills during his graduation day and he scored only 50% back then. This man later went on to deliver one of the best speeches in English in the USA.

3. Though Vivekananda used to respect women, entry for them was strictly prohibited in his monastery. Once when he was ill when his disciples fetched his mother. Seeing his mother in the monastery he shouted, “Why did you allow a woman to come in? I was the one who made the rule and it is for me that the rule is being broken.”

5. He travelled around America and England. In fact, he attended the World Parliament of Religions held in Chicago, Illinois.

6. During the course of his life, Swami Vivekananda suffered from as many as 31 ailments and illnesses.

7. Vivekananda was the man who took the Vedanta philosophy to the West and reformed Hinduism drastically.

8. Swami Vivekananda predicted that he would not live beyond 40 years.

9. He was known as a connoisseur of tea. He even introduced tea to his monastery even for a fact that the British colonizers in India didn’t allow tea drinking.

10. Swamiji used to borrow books from the library and return it the next day.

Swamiji's vision is a benchmark for all the youth around the world. That is why he is referred to as the philosophical genius and one of the finest minds of India.

(The above story first appeared on LatestLY on Jan 10, 2022 09:56 AM IST. For more news and updates on politics, world, sports, entertainment and lifestyle, log on to our website latestly.com).