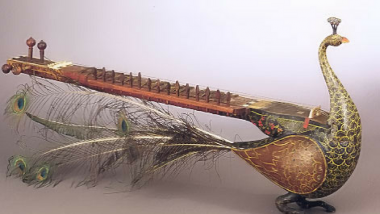 Music is one thing that is so consistent in our lives that we can’t imagine what will happen in it its absence. In the Indian culture, music has a special significance. Each state has its own kind of music, like Rabindra Sangeet in Bengal and Lavani in Maharashtra, Carnatic music in the Southern states and Sastriya Sangeet (Hindustani music) in the North. Not only that, India also has particular types of music for festivals and celebrations, like the shehnai for weddings and pepa for Bihu celebrations in Assam. Like our music, our musical instruments are also varied and unique.

The specialty of music is that it can almost be created from anything. Indian musical instruments are made from things as unique as those made of the horns of buffalos and coconut shells. As we celebrate World Music Day on June 21, here is a list of five musical instruments used in India that are peculiar to our culture and are absolutely melodious.

Ravanhatha has an interesting origin. The instrument is supposed to be named after Ravana, the chief antagonist of the epic Ramayana because it was in use during his era. The instrument, which reselmbles a violin, is quite popular among the Tamilians and Hela of Sri Lanka. Ravana also used the ravanhatha in his devotional songs to the Hindu god Shiva.

Pepa is a hornpipe musical instrument and is generally made from a buffalo's horn. It is popular in Assam. It is the traditional instrument of Assam and played during the Bihu festival. Though in the recent times the availability of the instrument has decreased significantly.

The Taus or the Mayuri Veena is a string instrument. It has a very special significance in Punjab in India. Its invention is credited to the sixth Sikh guru, Guru Harbobind. It got its name from the Indian bird peacock (Mayur) since the Mayuri Veena's sound box is in the shape of the bird.

Morsing, popularly known as morchang in India, is a wind percussion musical instrument that resembles the Jew's harp. In India, morchang is used in Rajasthani and Carnatic music. It is a small instrument generally made of wrought iron.

Alghoza is a pair of woodwind instruments. It is a popular instrument used by the folk musicians of Punjab, Sindh (Pakistan), Kutch (Gujarat), Rajasthan and Baloch. An Alghoza consists of two joined beak flutes, one is for melody and the other one for drone.

Apart from these five instruments, kuzhal, gubguba, sursingar, yazh nagfani, sambal and pakhawaj are some other unique musical instruments played across India. Sadly, some of these instruments are now almost extinct, since musical sensibilities of the people are changing with time.

(The above story first appeared on LatestLY on Jun 21, 2018 12:01 AM IST. For more news and updates on politics, world, sports, entertainment and lifestyle, log on to our website latestly.com).