Red Hand Day or the International Day against the Use of Child Soldiers is observed to make pleas to political leaders and events staged around the world to draw attention to child soldiers. 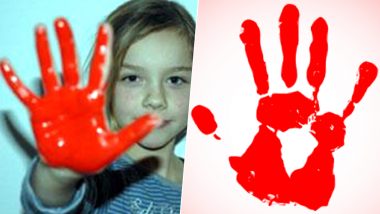 Red Hand Day or the International Day against the Use of Child Soldiers is observed to make pleas to political leaders and events staged around the world to draw attention to child soldiers. It brings attention to how young boys are barred from their childhood and forced into military forces. Red Hand Day highlights children under the age of 18 who participate in military organisations of all kinds. The aim of Red Hand Day is to call for action to stop this practice and urges support for children affected by it.

Red Hand is being observed across the country since 2002. Nations and regional coalitions around the world have been holding events to draw attention to end the use of children for military purposes. Various initiatives are carried out every year to draw attention to the observance. In 2008, children and teenagers initiated a campaign to collect as many as red hand-prints to present to the United Nations with messages calling an end to the use of child soldiers.

The Additional Protocols to the 1949 Geneva Conventions (1977, Art. 77.2),[9] the Convention on the Rights of the Child (1989), and the Rome Statute of the International Criminal Court (2002) all forbid state armed forces and non-state armed groups from using children under the age of 15 directly in armed conflict (technically "hostilities"). This is now recognised as a war crime, however, they are continued to be used widely.

A correct estimate of the number of children working in the armed forces are not known as the UN does not have access to conflict zones. In 2017, Child Soldiers International estimated that tens of thousands of children, possibly more than 100,000 were in state and non-state military organisations around the world. It was reported in 2018 that children were being used in at least 18 conflict areas.

(The above story first appeared on LatestLY on Feb 12, 2020 09:00 AM IST. For more news and updates on politics, world, sports, entertainment and lifestyle, log on to our website latestly.com).