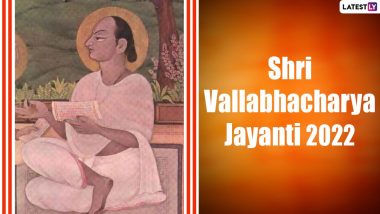 In honour of Mahaprabhu Vallabhacharya, the Government of India issued a postage stamp worth Re 1 in 1977.  After wearing the Yagyopaveet at the age of 7 years, Vallabhacharya studied the Vedas, Upanishad etc. scriptures in 4 months and at the age of 11, giving proof of his amazing talent, by appearing in the Rajya Sabha of King Krishnadev of Vijay Nagar in Dakshinachal. Impressed by his supernatural brilliance and talent, the king offered him the post of Acharya. He laid the foundation stone of the Vallabh sect for those who follow this path. Vallabhacharya has considered every living being as a part of the Supreme Soul.

It is said that once Shri Vallabhacharya was on his way towards the North-West part of India and there he saw a mysterious phenomenon near Govardhan Parvat. He saw a cow which was shedding milk daily at a particular place in the mountain. On digging into the place, the idol of Shrinathji was found which was installed. Hence, it is believed that Lord Krishna embraced Vallabhacharya and appeared in front of him in the form of Shrinathji. The followers of Vallabhacharya worship Bal Krishna.

(The above story first appeared on LatestLY on Apr 25, 2022 04:01 PM IST. For more news and updates on politics, world, sports, entertainment and lifestyle, log on to our website latestly.com).