When Is Shab-e-Qadr 2022 in India? Know Date, Beliefs and Significance of Celebrating Night of Power and Blessings 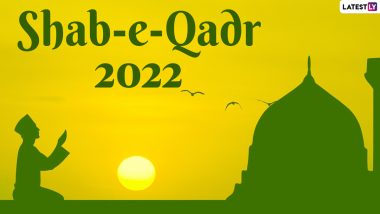 Shab-e-Qadr or Laylat al-Qadr is an Islamic observance that is rendered in English as the Night of Decree, Night of Destiny, Night of Power, and Night of Value. Shab-e-Qadr is celebrated widely by Muslim communities on distinct dates. In Islamic tradition, people commemorate the occasion of Shab-e-Qadr as the night when the Holy Quran was first sent down from Heaven to the earth and also the night when the first verses of the Quran were revealed to the Islamic prophet Muhammad, founder of the world religion of Islam. The occasion falls on an odd-numbered night in the last ten days of Ramadan, the month of fasting and prayers. To be precise, it is usually celebrated on the 27th of Ramazan. Shab-e-Qadr 2022 in India will be observed from the evening of Friday evening, i.e. April 28 till the morning of April 29, Saturday. Shab-e-Qadr is considered a public holiday in several countries. When Is Jamat ul-Vida 2022 in India? Know Date, Jumu’atul-Wida Traditions and Significance of Celebrating the Last Friday of the Muslim Holy Month of Ramadan.

The occasion of Qadr Night is observed on different dates by distinct Islamic denominations. Many Sunni Muslims believe that the Night of Decree falls on the 27th night of Ramadan, while most Shiite Muslims consider it to have happened on the 23rd of the holy month. As the exact date of the Shab-e-Qadr is not mentioned in Quran, people usually observe the last ten days of the Ramazan, which are contemplated as the most blessed period. So, the 21st, 23rd, 25th, 27th or 29th night of Ramadan could be the Night of Power and Values.

It is stated in Quran (97:3) that "the Night of Decree is better than a thousand months". For the same reason, Muslim families mark the observance by reciting from the Holy Quran, offering special prayers at the mosques, holding zikr and other religious traditions to seek the blessing from Allah for contentment, happiness and success in life. Muslim believe that the Quran was revealed to Muhammad in two phases, the immediate revelation happened on the Qadr Night and then gradual revelation occurred over the next 23 years. Furthermore, devotees, on Shab-e-Qadr, usually visit graveyards to seek eternal blessings from the departed souls and ask for the mercy of Allah for all the sins.

(The above story first appeared on LatestLY on Apr 25, 2022 03:12 PM IST. For more news and updates on politics, world, sports, entertainment and lifestyle, log on to our website latestly.com).