Hailed as One of the Best Joint Replacement Surgeon, Dr Dibya Singha Das Wins Hearts With His High Ideals 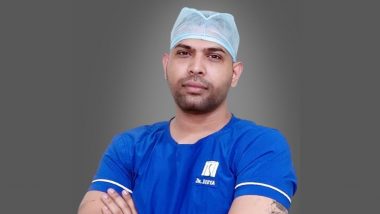 Being a country which is a home to several real role models, Dr Dibya Singha Das leads with the belief that India can be a land that influences a growing young population, adding to which, he explains, “If you are good at your field of work then people should know about you and your efforts and one must also acquire fame as a cricketer or a cinema star".

One of the best Joint Replacement surgeons in India, Dr Dibya Singha Das was born on 15th April, 1988 in Balasore, Odisha India. Dr Dibya has taken forward the legacy towards the profession of saving lives since he was born to Dr Sakya Singha Das, a retired government homeopathic doctor, Dr Leena Das who was also a government homeopathic doctor who left the planet in the year 2021.

Having completed his schooling from D. N High School, Keonjhar, Odisha and intermediate college from D D Autonomous College, Keonjhar, Odisha, Dr Dibya Singha Das was fortunate to have found his soulmate in yet another medical professional, Neuro-anaesthetist Dr Ankita Mohta in the year 2016.

Dr Dibya Singha Das initially wanted to become a pilot and join Indian Air Force through the national defence academy but due his sister’s demise, his parents were reluctant to send their only child to IAF, respecting the apprehensions of his parents, he prepared for the medical entrance exam and joined MBBS in 2006 at Utkal University. Having completed his MBBS  from Utkal university in 2011, he rode his masters in Orthopaedic surgery in the year 2016.

Post completion of his masters he went to Kolkata for honing his skills with a fellowship training in knee surgery, and then Delhi for his primary arthroplasty fellowship. With such impeccable training, Dr Dibya Singha Das equipped himself with yet another enriching experience in France for a super speciality training in advanced and navigation arthroplasty at (HCL) Lyon University.

Not only this, Dr Dibya Singha Das was determined to get the required expertise from Santander, Spain for Hip arthroscopy and arthroplasty training at S.A.U. He came back and became an assistant professor in Utkal university.

But the unstoppable Dr Dibya Singha Das wanted to refine his surgical skills, for which he undertook training in Complex trauma and Pelvic & Acetabular surgery at RWTH Uniklinik, Aachen, Germany.

The stalwarthy doctor has undertaken over 8000 orthopaedic surgeries for which he is rightly hailed as one of the best arthroplasty or joint replacement surgeons in Odisha and eastern India.

Other than a fulfilling career as a surgeon, Dr Dibya Singha Das is the director of the revolutionary Ortho One Orthopaedics and is an incumbent Joint secretary of Odisha Arthroscopy Society.

He also holds positions at two corporate hospitals in Bhubaneswar as a reigning consultant in orthopaedics & Joint replacement surgery.

Apart from his professionally excelling career, Dr Dibya Singha Das is a philanthropist and visionary who reinforces the spirit to serve the underprivileged in low costs and even free of cost. The noteworthy surgeon has been conducting free/low cost surgeries since 2016.

Stuck by the idea of earning from the rich and giving it to the poor for maintaining a balance in the society, the foresighted humanitarian aims to build a single specialty hospital in orthopaedics where he can treat both rich and poor under one roof.

With such high beliefs and practices, Dr Das is an advocate for the irreplaceable efforts of the citizens who lay their entire lives in the roles of a soldier, doctors etc and deems them as the real superhero.

He also believes that the mainstream media should be the harbinger of spreading the contributions of these unsung heroes to the world. He also takes a firm stand on the reckless coverage that is being given to cinema stars, cricketers and politicians. With such high beliefs and practices, Dr Dibya Singha Das is reigning as a medical professional and humanitarian par excellence.